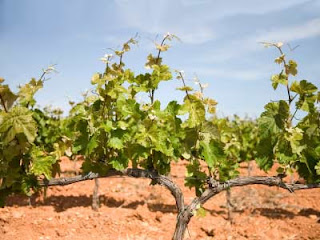 Spain's wine industry has gone through a transformation in the past decade or so and the rise of wines like this one are the manifestation of that makeover. Seemingly designed specifically for the American consumer's taste for strength in flavor, a wave of bold, international-style wines with expressive, in-your-face fruit characterize the new guard.  This is much to the chagrin of traditionalists and purists.
Just ten years ago, options for Spanish wines in the US were mostly limted to Rioja and sherries.  Then wines from Ribera del Duero crept on to the scene, as did a handful of value-priced whites from Rueda and Rías Baixas before Spain exploded on the world market.  Thanks to modernization in Spanish winemaking, quality and value skyrocketed.  And thanks to a much-improved national infrastructure, today options in US wine stores are better than most in Spain itself.
With this explosion came a wave of grapes new to the marketplace like Monastrell, Albariño, Mencia, and Garnacha. Of course these grapes have been around for centuries and commonly used as blending grapes, but Spainish winemakers have earned their bragging rights to doing these grapes justice all on their own.

Still, the traditionalists have a right to be up in arms.  Their claims of commoditization in Spain's wine identifty are not entirely unfounded.  Convenience stores and gas stations in the US routinely stock Spanish reds nearly devoid of character or differentiation.  It's drinkable (sometimes) stuff, but the volume of unapologetic, homogenious fruit bombs is staggering.

No surprise I guess.  They've got to do something with all those grapes.  Spain, afterall, has more land planted to grapes than any other country.

Which leads us to the current generation of winemakers and their wines' reputation.  Spanish wines (reds in particular) suffer from a not-undeserved rep for patronizing the marketplace with offerings reflecting a formulaic approach rather than a vineyard-centric model.  Like all generalizations, this one hurts those to whom it does not apply.  There is some world class wine coming out of Spain and you an expect for that to continue to develop as the wheat separates from the chaff.

In the meantime, one word of advice: do your own due diligence.  Spanish wines have enjoyed so many press accolades that we are at odds with - more than any other winegrowing region - that we can't help but be suspicious.
spain wine