My wife and I have a secret hangover prevention system. Here's how it works. (How's that for lead in?)

Heck, we were sure it was going to at least be drinkable. 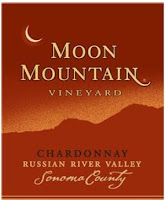 Moon Mountain has a pretty good track record of quality wines at value prices. The 2004 Cabernet blend was likable enough to buy more. And so was the 2005 Cabernet. Both wines were in the neighborhood of $15.99. So when the 07 Chardonnay went on sale for $6.99, something strange was clearly afoot. And this is supposedly Russian River Valley fruit? Really?

Sometimes there's a reason for the discount. And this is one of those times.

Who knows what went wrong. Was there a mishap during blending? Did someone fall into a fermentation vat? Did a barrel somehow get de-sanitized? This wine is so off base, it's hard to imagine that this is how they planned for it to go. It simply can't be the result of the vineyard.

We felt badly because we know they can do better because they have done better. Is it a coincidence that the winery, previously owned by Chalone, was acquired by beverage giant Diageo in 2005? One data point does not make a trend, but we'll be checking in on this previously hopeful property again.