Because we believe that price is an important factor in the value of a wine, this wine is deserving of a closer look. 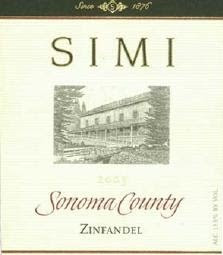 The 2007 Simi Zinfandel is nothing to write home about.  It's fine.  It's a good party wine - a good pizza wine.  It's got the pepper you expect from a real Zin, but it doesn't have the density and core that really good Zins have.  Though the color and opacity are dark and inky, the fruit is brightly flavored, making it a little lighter in style than typical in quality Zins.

While there's conflicting information about the exact origins of the grapes for this wine (informaiton still pending from the folks at Simi), I think it's safe to say that it's all Sonoma County fruit.  There's also conflicting information about the composition of the wine.  Different sources claim this bottling to be somewhere between 76% and 90% Zinfandel with the balance being Petite Sirah.  And you can tell.

You can see where this is going.  Marked down to $9.99 it's still just a three star, but at $4.82, this wine gets four stars.  Scratch that.  Four and a half.
Rating: Drinkable and dirt cheap, pick it up by the case (if you can get the deal).