WTF Is Going On? - UPDATE

UPDATE:  Winethropology spoke with a rep from Constellation Brands who was unaware of this rebate program but promised to call back with more information.  We decided that while we're waiting, we'd test drive this deal and report back.  Here's what we know now: 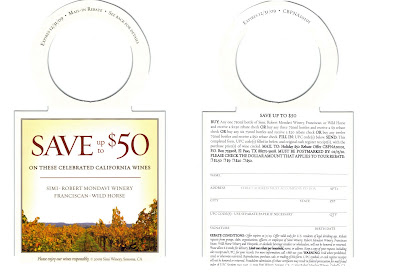 The rebate is not limited to any retailer or state, so get your best deal wherever you are and save $50 on a case.  Not that thirsty?  The rebate applies to one, three, and six bottle increments, too ($2.50, $9, and $20 rebates respectively.)  It is, however, limited to one rebate per household, so get creative if you're planning on buying more than a case.

So, where do you get these rebate forms?  That we don't know for sure.  We inquired with a helpful retailer who gave us a handful.

Not too shabby a line up.  But why?  Why is a distributor pouring these blue chip wines on the eve of the Holiday Trifecta?  Business is slow.

When asked, point blank, if they're having trouble moving these wines, the distributor's rep's response was a simple, "Yes."  Inventories are high, cash flow is at a trickle, and brands at the top are among those most affected - even these seemingly bulletproof labels.  And Constellation Brands, which owns all of these wineries, is making a huge push to get these products moving.

This week a large grocer is participating in that huge push.  Here's the deal: Wines in the Mondavi, Simi, Wild Horse, and Franciscan line ups have been discounted.  A 10% case discount (including mix-and-match) applies.  And a producer's rebate of $50 per case is available.
Now, the term "discount" is a relative term.  Especially when so many wines have had a meteoric rise in prices.  Take for example the Franciscan Magnificat, a quality Bordeaux blend that for years has been a reliable, low risk special occasion wine.  Two years ago, the going rate was $35 a bottle.  Then suddenly it shot up to $45, and then $50.  So, when they say it's discounted to $40 a bottle, it's not as though they've rolled back prices to 1975.
Still, those incentives can add up.  Take for example the 2007 Simi Sonoma County Zin.  Simi's site has it listed for $30.  The grocer had it listed for $20.  It's now marked down to $9.99.  Minus your case discount, it's 8.99.  Factor in the $50 rebate and the per bottle cost drops to $4.82.
Apply that same math to the Magnificat and your cost drops to $31.83 (slightly below regular pricing in nonregulated markets).  But their Napa Valley Chardonnay, typically $14.99 drops to $7.52.
So, the incentive is to move volume at the lower end of the portfolio.  And at those prices, who are we to argue?

We've tasted the 2007 Franciscan Chardonnay, the 2006 Franciscan Magnificat, the 2006 Mondavi Napa Cabernet, the 2007 Simi Sonoma County Zinfandel, and the 2006 Mount Veeder Cabernet.
You can read the reviews of each as they are available, but to sum it up, none of these are as good as they have been in past vintages.  None of them are worth their MSRP.  But they are all worth a second look at these prices.
other