Rating:  A lovely balance of old world and new world Barbera.  Hard to find, but worth the search. 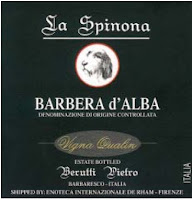 The rest of the story:  Full disclosure:  This wine was received as a sample from a Winethropology reader.
Deep in Piedmont is the heralded region of Barberesco, home to some of the world's most worshiped wine - and Pietro Berutti.
La Spinona, Mr. Berutti's estate, large by Piedmontese standards, is planted in various locations to the three B's (Barolo, Barbaresco, and Barbera), as well as Dolcetto and Chardonnay.

Sporting the face of a dog, the label is the stuff of local legend.  The Spinona is a breed of Piedmontese hunting dog, more common in northern Italy than in America.  The story has it that one of the Berutti's Spinonas saved their only son from drowning in a lake on their property.  The act of heroism earned her a spot on every bottle and the son then went on to become a veterinarian.

As for what's behind the label, this wine is a treat.  The wine shimmers in the glass with not even a hint of brick edges, surprising given the age of this wine. The nose is delicate and pleasing, and offers an accurate preview for what's in store.  Harmonious and smooth.  The fruit, while prominent and undeniably Barbera, is restrained by silky smooth tannins and a structure that balances the old world honor for the earth with the new world value for ripeness.

Imported by Enoteca de Rham, this really is a tough one to find.  Still, keep an eye out for it.  And Vino in NYC has a few bottles of the Barbaresco left, which is reputed to be even better than the Barbera.  Salute!
barbera piedmont red spinona