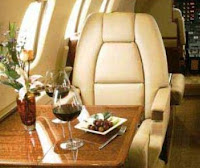 The rest of the story:  No, you're not seeing double.  Yesterday we reviewed the 2005 vintage of this wine, which was very good.  But this...this wine is an altogether different caliber.  And if it's an indication of 2007's potential in northern California, well, we're pretty excited.
We were so excited about this wine that we made it a last minute addition to the Must Try list of 2009.  Out of the gate this wine tells you two seemingly contradictory things:  One, this is going to be great...scratch that...insane, given some time.  And, two, drink me right now!
It's hard to believe something can be both so serious and so damned fun at the same time - like partying with Warren Buffet and Matthew McConaughey on a private jet.

Though younger, this wine is way more approachable than the 2005.  That's not to say it doesn't have the stuff to go the distance - big fruit packaged in a refined structure with all the right proportions perfectly balanced.  Knights Valley's character shines through in this wine as friendliness and it has no hard edges.  Tastes expensive.

Were it priced $5-10 less, this would be a 5 star wine.
beringer cabernet california knights valley red