How Much Wine is Too Much Wine? (Notes From the 2010 PNV Perspective Tasting)

on February 25, 2010
Ah, what a fun question to do field research on.  Let's jump into a vat of fermented grape juice, swim a few laps imitating blue whales, and then revisit the question. 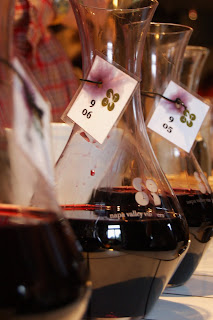 After almost drowning at this tasting, that's not too far from what it was like.
The Premiere Napa Valley perspective tasting was held on Friday, Feb. 19, at the Rudd Center on the campus of the Culinary Institute of America at Greystone - a beautiful, well-appointed, and modern facility. A total of 24 wineries each submitted Cabernets or Chardonnays from three sequential vintages; 05-07 for Cabs and 06-08 for Chards. Wines were group by winery, served blind, and labeled by vintage. The format was a walk-around, self-guided tour of the wines.
Swirl, sip, spit, repeat.  Seventy two f-ing times.
Peeps, this is no way to appreciate, let alone enjoy wine.  Shit, it's barely any way to evaluate them at an analytical level.  As Joe Roberts, 1 Wine Dude and super great guy, said so perfectly in this article, "...the equivalent of having a joy vacuum attached to my wine-loving soul and turned on full-blast."
David Yorgensen, winemaker at Kind Cellars and O'Brien Estate,  also made an argument against this kind of torrent of wine. He said that in comparative tastings wines just don't get a fair shake - they simply aren't evaluated on their merits. By contrast, standout wines - wines that are different, whether inherently better or not, end up scoring higher - because they're different.
David may have a point there - or he may be making a excuses for a region that is running dry of originality.  Another debate for another time...
Still, suffer through the regimen of these and it does give you a sense of the fabric of the vintages and the overall sense of place.  A perspective.  Full disclosure: most, but not all wines were tasted.  As much fun as doing the breast stroke in a vat might be, too much is too much. 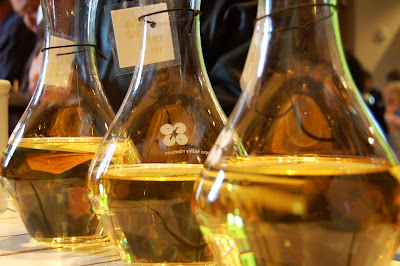 Specific standouts follow, but first, the broad conclusions. For Chardonnay, the overriding takeaways from this tasting were first, that the 2008 vintage is noticeably more fragrant than its two predecessors. Second (and more sobering) is that consumers ought to either look beyond Napa Valley for consistent quality in California Chardonnay - or be very careful about their selections.
Offerings from big names like Miner, Cakebread, Shafer, and Saintsbury were disappointing. And pricing on these lackluster wines make them categorically risky. That said, Pine Ridge's line up of Chardonnays was very noteworthy. A trifecta of lovely wines.
On the Cabernet front, the main conclusions are that the wines were too young to appreciate at their fullest. Overall quality was uneven with a general lack of distinction and character. A lot of homogeneity here.  No surprise, appeal is leaning heavily towards the 07 vintage, but with the 2006 wines collecting dust in the distribution chain, in could be a while before we see many of these come online.
In Napa Valley, where Cabernet is King (and it actually grows well), there were far more wines to like than in the Chardonnay flight. Solid showings came from Etude, J Davies, Parry Cellars, Pride, Spottswoode, and Summers.  Consumers will find greater overall satisfaction with the 2007 vintage.  And with any luck, some return to sanity on prices.
More to come on Premiere Napa Valley tastings that were less science and more, well, real.
cabernet chardonnay napa other