on February 10, 2010
2010 will prove to be the most catastrophic year the modern wine industry has seen. 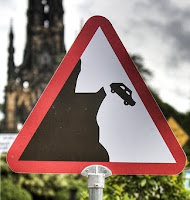 Bottom line: If you drink wine at or above, say the $20 mark, you might want to exercise a little restraint for a few months.  Wine's going to get cheaper.  A lot cheaper.

The rest of the story: If you've been paying even casual attention to the writing on this site at all, you know that the price of a wine absolutely matters as a factor in its ranking.  If you concur, then listen up.

Some time ago we asked the question 'WTF Is Going On' when we saw the leading indicators of a slide in the wine market.  Well, the indicators are getting stronger - and they don't look good for wineries, distributors, or retailers.

Domestic economic conditions, the job market, consumer sentiment, currency valuation, and other factors all play a role in this tragedy, but in a nutshell it all boils down to this:

1) The economy hit the shitter.
2) People ( a LOT of people) lost their jobs, livelihoods, and/or savings.
3) Even those who didn't lose everything got a little spooked.  Okay, more than a little spooked.
4) Everyone cut back on nonessential items - and downgraded on luxury items.

So, did those who spent $60 on a bottle of wine stop drinking?  Hell no.  They just started drinking cheaper.  And you know what they found?  That life ain't so different at the $30 price point.  In fact, it's not so bad at $20/bottle.  And, unlike earlier times, no one gives a shit what their neighbors think this time.

The effect this is having on the super-ultra-hype-premium wine market is nothing short of devastating.  In fact, we'll stick our neck out and make a not-so-bold prediction: 2010 will prove to be the most catastrophic year the modern wine industry has seen.  This time next year, the road to eking out a profit in this market will be littered with the carcasses of the dead and dying - and respectable - independent wineries.

If wine were stocks, you'd be well advised to hoard cash and hold off on any blue-chip purchases for at least a few months.  Folks, we're on the downhill - and headed for a cliff.

Another prediction:  2010 will also create the best conditions modern wine consumers have ever seen.  High end wine is about to go on a fire sale.  Get ready.

In the meantime, enjoy the plentitude of incredible bargains the market's been offering up for a long time.
buying advice other