The Smartest Guy in the California Wine Business?
We've been excited about running this piece since doing the interview...A few weeks ago we sat down with Doug Rodgers, industry veteran and COO of one of the more innovative business in the wine trade today.  He was kind enough to share many insights on the state of the industry - and the beauty of his company's simple approach.  Below is a mere fraction of the ground covered that morning, but gives a glipse into what could well be a wine-drinker's new favorite source for lofty quality wines at down-to-earth prices...
Cameron Hughes Wine is poised to have its best year yet - impressive given the state of the premium wine market. And the reason you should care is because they’re bringing you expensive quality wine at value rack prices. How? They buy surplus capacity from high-end wineries and growers, finish it, and market it under their own labels.
The result: Extreme value wine.
Our recent Notes From the Titanic piece waxed about the impending carnage in the California wine industry, but also made reference to the upside of a down economy. This, folks, is one place to find that upside. If you have a taste for exceptional quality wine, but can’t stomach the insane prices, this is a company to keep an eye on.

Started six years ago when a skinny wine geek decided to chase his dream, Cameron Hughes Wine has grown to sell around 250,000 cases of wine a year – roughly the same as Robert Mondavi Winery’s production.

What’s the secret? Simple. Buy low, sell high. Or, more accurately, sell less low. The recipe, as told by Doug, starts with sourcing. Wine is bought at different stages of readiness; bottle-ready wine that wineries don’t have the demand for, wine still in barrel that vintners’ can’t find buyers for, and (increasingly) grapes still on the vine whose growers are being left high and dry by buyers walking away from contracts.

This opportunistic purchasing provides a critical lifeline to suppliers. For example, when a prestigious winery’s sales forecasts don’t match what’s in their inventory, they have a choice; flood the market with lower priced wine and suffer the brand equity consequences, or sell it – anonymously – in bulk. Understandably, these producers are worried about their reputations. But they’re also worried about the bank calling. CHW addresses both concerns: they keep their mouth shut and they pay on time – two increasingly rare qualities in the marketplace.

“We are basically in the arbitrage business”, says Doug, underscoring the point that, in many ways, they serve as a risk outlet for the industry’s supply chain. The more the market is in the crapper, the more leverage CHW has in negotiating the best quality at the lowest price. Ergo, killer wines at bargain basement prices.

Take for example Lot 140, a Chalk Hill Cabernet from the lauded 2007 vintage. You could pay $65 for a Cabernet from Chalk Hill, but Lot 140’s price? $16. So the wine has a good pedigree, but is it any good? A full review is in the works, but the short story is that it is a collectible wine capable of extended aging. Minimum 4 stars.

Besides scoring choice product, the position of modern négociant also affords CHW the advantage of being selective about everything coming into their portfolio. Let’s say the 2006 vintage was bad for California Zins. Since they don’t own any Zinfandel – or anything else for that matter - they don’t have to put one out at all, whereas most wineries can only represent their vineyards, contracts, and inventories.

But not every wine is a hit. Sometimes there’s a miss as our less than flattering review of Lot 127 Chardonnay showed. And the market can turn, too. Cameron got stuck holding a boatload of high end Shiraz thanks to the Yellow Tail backlash (consumers just can’t seem to bring themselves to pay more than $10 for any Australian red anymore). 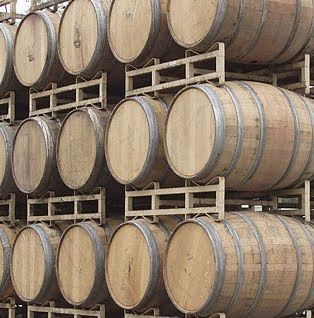 Once they strike a deal to buy a wine, that’s just the beginning for the team. From the various stages of readiness wines are in when acquired, they are seen through the final stages of vinification, treatment, assemblage, and bottling by resident winemaker Samuel Spencer. At the end of that process, a plainish label gets slapped on the bottle along with a price tag that’s a fraction of what the equivalent – or sometimes exact same – wine wears from established, haughty wineries.

So, how do you put your hands on it? CH has made inroads to Sam’s Club and Costco, as well as World Market and Whole Foods channels. But online is where you really want to be. Incredible variety (30 reds and 11 whites at recent count), sampler packs, free shipping sales, and other incentives make it a no-brainer to buy direct. That’s one of the reasons their customer loyalty is so high.

You don't have to be a wine whore to get hooked on high end wine at grocery store prices. Customers who like a bottle they’ve had find themselves ordering others direct. Repeatedly. And once you’re shopping online, the customer service is terrific. In Doug’s words, “If you don’t like it, call me up and tell me. We’ll make it right.”

CHW’s online sales, which are by far the most profitable segment of any producer’s business, increased by 35% in 2009.   Nice.  Smart.

So, with so many choices, how does one pick? Doug says his current favorites are lots 116, 140, 143, and 146. We’ll be reviewing those wines in the coming weeks, but he also says to get ‘em while they’re hot. Once they’re gone, they’re gone.

Stay tuned for reviews of these – and more – CH wines.
cameron hughes other