Premiere Napa Valley - A Great Time To Be In Napa

The cover story last weekend's New York Times Travel section, Tuscany Without the Crowds, features a photo of Tuscany during Winter. It shows a lush green hillside with Cypress trees and stucco villas bathed in early morning light. The photo alone makes you want to book a flight. After reading about the cool-climate in Tuscany, when locals fill the cafes and the seasonal food is at its finest, you hope no one else is reading the article.
It was a reminder of what makes Napa appealing in the Winter.

Napa isn't Tuscany. But there's no better time to visit Napa than after its hills soak up the winter rains and turn emerald green. That's when the crowds thin and the landscape starts to show off its fertility.
So, when the last minute call came to cover Premier Napa Valley, the trade-only wine auction, I was excited to have a reason to be there – and to see Napa at its finest. I'd also get an inside look at the rarefied world of wine auctions. For the uninitiated and modestly informed, it was like a one day pass into an exclusive club of well-heeled debauchery. 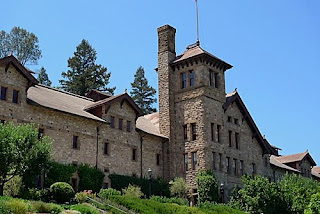 The auction was held at the Culinary Institute of America’s campus in St. Helena - an impressive piece of real estate. Housed in the old Greystone Cellars Winery, its architectural style is old-world nobility at first glance, perfect for a hoity-toity wine auction. There must have been a very generous benefactor who believed aspiring chefs should learn their craft in such a grand setting.

Brief confusion ensued at the entrance as the coveted press pass, supposedly transferred to my name, was nowhere to be found. But that didn't keep the most pleasant and accommodating officials from creating one on the fly after discretely scrutinizing my credentials - a sign of how hot a ticket this event is.
Entering the culinary institute's main foyer the rapid-fire call of wine auctioneers drifted from above. Sounds like an auction alright.

Although a first-class event for sure, the image of a subdued, stuffy auction it was not. The auction room was packed with three to four hundred people. Many people were milling about the periphery, drinking wine, chatting, taking in the scene; the peanut gallery. 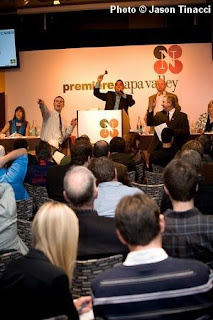 A group of auctioneers shared a mic on stage, taking turns shouting into it, trying to entice the rows and rows of serious buyers before them. Most sat studying the auction program in front of them, plotting their strategy. It was hard to determine exactly where the lots started because within mere seconds the bidding would be at ten grand - and climbing quickly. Perhaps that’s how the real bidders keep the chump buyers in their place.
There were two hundred wines, or "lots," up for auction offered in quantities of between five and twenty cases. When I arrived at the auction floor they were at Lot 82; five cases of 2008 Cabernet Sauvignon from the Robert Craig Winery. On average, it took about a minute to finalize an offer. An exuberant auctioneer would shout "closed!" and slam the gavel one hand while trying not to spill the red wine in his other.

The instigators (I'm sure they hold an official title) stood among the reserved buyers, goading them on with pleading expressions, then smiling approvingly when someone raised their paddle and made a bid. It wasn't unusual to see $100,000 committed in the span of five minutes. And the efficiency of the operation was impressive.

Looking around, you saw a casual, well-dressed crowd. It wasn't a glamorous-looking group, but it was by no means a shoddy-looking crew either. Understated wealth. On the opposite side of the auction hall was the Culinary Institute's expansive teaching kitchen. It spread out like a small hangar, massive multiple-range ovens with big hoods surrounded by prep stations. You could feed an army there. Presumably that was where the wine was being poured. It was time to wander over. 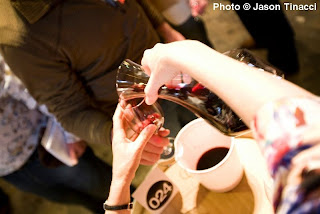 On the right, about halfway into the kitchen was a table with a small crowd two people deep standing in front it. On it were about a hundred open bottles of wine. Two guys stood on the other side, not so much tending bar as encouraging you to help yourself. Enjoying some wine too, they would occasionally remove an empty bottle from the table, then pull and open a new one from the waist-high pile of cases around them.
Staring at an endless array of labels it would help if you knew what your looking for. I tasted the Stags Leap Sauvignon Blanc. It was nice; a little fuller and not nearly as citrusy or acidic as most Sauvignon Blancs. A woman who I could tell wanted to talk shop sidled up next to me. Taking the bait, I asked her to opine on the wine she was drinking. "Astringent," she said matter-of-factly. I couldn't remember exactly what astringent was supposed to mean, but I knew enough to know it wasn't a compliment.

I tasted a couple of Cabernets, and a blend, none of which did much for me. Then a couple of friendly Texans wearing reptile-skinned loafers and expensive watches suggested I try a Cabernet Sauvignon from one of their favorite winemakers. It was a barrel sample of the 2008 Dream Weaver from Soñador Cellars. It's the kind of Cabernet I like, medium-to-full bodied, balanced and smooth. After pouring myself a glass, he asked for a "trucker pour." Gotta love Texans.

By the time I finished the Dream Weaver the auction was winding down.  The bidding closed with lot 200: the 2008 Cabernet Sauvignon from Merryvale Vineyards, which capped a successful day by any measure.  The final tally: nearly $2 million and an average of just under $10k per lot.

This party is not for the faint of heart - or under funded.

There were plenty of invite-only tastings and parties to follow, but having happily immersed myself in one event already, I was happy to call it a day.

Opting for the scenic route back to San Francisco, I drove south on the Silverado trail, the hills to the east ablaze in afternoon light as the sun set behind the Mayacamas.

It was a nice time indeed to be in Napa. 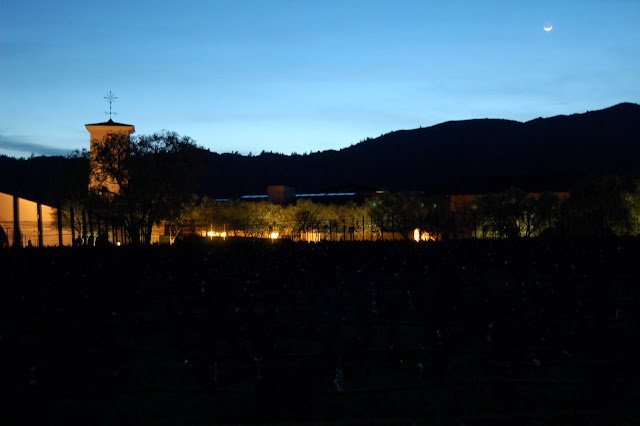