Events that were part of the Symposium For Professional Wine Writers and  Premiere Napa Valley last month showcased staggering numbers of Napa Valley Cabernet.  Staggering.  Hundreds.  Literally.  And we cherry-picked the best of the lot for you here.

The events ranged from formal, wine-celebrity-studded dinners to free-for-all barrel tasting throwdowns.  And while there were some soul-stirring wines that captivated attention and hearts, the collective offerings were predominately, well...
disappointing.

Disappointing?  Napa Valley Cabernet?  Okay, at the risk of pissing off some very generous and gracious hosts, the wines - and this is a gross generalization - weren't just disappointing.   They were homogeneous.  Sometimes even mediocre.  Not special.  And expensive.

A nonscientific sampling of retail prices suggests that a modest average was $60 (but was probably closer to $75).  Son of a bitch, sixty freaking dollars.  At these prices, you should expect emotionally evocative wines of uncompromising quality.  Seriously people.

But this is about the standouts, the winners.  Almost without exception, the auction lots poured at these events, which were barrel samples of ultra-unique Cabernet, were beautiful.  Gorgeous.  Sometimes insane.  Alas, few, if any, of those wines will be available to the common man.

Before getting into specifics, a few disclaimers: 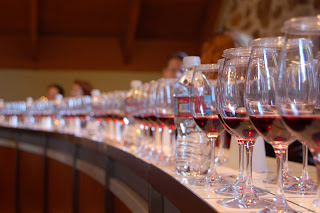 For those who would rather not get into the details, the very, very short list follows, but all of the wines named below are worth seeking out: 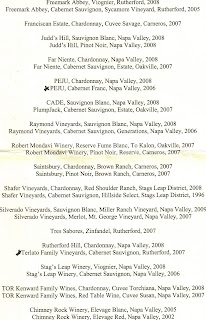 Though there were many parties, tastings, dinners, etc. that week, just six are covered here.  One better than the next.

At the Symposium Fellowship Dinner at Meadowood (full list on the right) the big faves were:
The Terlato was something special indeed and we will be doing a full review of the Terlato after their press samples arrive.  The Peju was a breath of fresh air - and worth seeking out again (see below).

Charles Krug was the scene for the enormous Appellation St Helena tasting, featuring 40 horrifically overpriced wineries.  It was a circus.  One self-congradulatory pourer declared of his nice, but not outstanding Cab, "...and it's only $75!"

Of all these producers, there were a small handful of standouts:
The Boeschen men are making a really nice Cab and a respectable Carrera blend.  The soft-spoken Parrys' wine had a chance to open up a bit and showed beautifully.  Finally, the Ehlers Estate 1886 was refinement incarnate; lovely and distinguished.  But, really, are we talking about the wine or Kelly McElearney?

At the Spring Mountain District party (click here for full list of wineries), there were a lot of very expensive wines and not a lot of great ones.  The least expensive Cab tasted, a wine from Schweiger Vineyards, rings in at $48.  The winemaker said, "We believe our wine should be for every day drinking."  Get real, man.  Good ones (but mostly not worth the money) were:
Terra Valentine was actually not pouring the Amore at that event, but it was poured at a Symposium dinner.  The Sangiovese-based blend is velvety and lush.  A unique wine worth checking out.

Peju Province Winery hosted the Rutherford Appellation party where the most popular beverage was - get this - a beer from a local microbrewery.  Still, these were some special wines:
It's hard to believe there's any more of the 05 Anthology on the market, but the economy did hit the crapper.  Such a powerful blend that gets its message across with delicacy.  Amy Aiken's Meander was another treat, though we can't wait to see what her 07's going to be like.  The Peju Cab Franc mentioned above was also on hand and could not be resisted for another go.
The highest concentration of quality of all the stops was found at the uber-hip Stag's Leap District wine lounge, hosted in Pine Ridge's caves.  In attendance were some of the wine world's heaviest hitters - Chimney Rock, Shafer, Clos Du Val, Steltzner, and more.  Incredible shit is being made in this region - and not just the weed.  Some truly moving wines there were:
While the introduction to Baldacci's impressive lineup was eye-opening, time stopped for a few minutes at the Shafer station as lips met the 2007 One Point Five.  Sweet mother of God, this wine is heaven in a glass. Earth-shaking, soul-affirming, emotion-stirring love in a bottle.  Please, please, please Santa Claus.

Finally, perhaps the most boisterous and welcoming event of the week, Duckhorn and its associated brands hosted a dizzying array of food, wine, and people - all of which were top quality.  Duckhorn seems to be one of the few wineries to have gotten the message and is responding to new market realities in positive ways, such as their newly rebranded/repriced Decoy line.  One wine was more mind-blowing than the next, especially the Pinots... 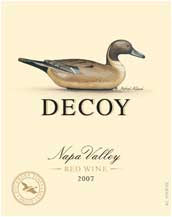 Pourers paraded around the joint with double magnums of rare vineyard and library wines making the affair even more dreamlike than seemed possible. The 2004 Paraduxx was one such wine and drew ooohs and aaahs from all who partook.  But the Goldeneye Pinots were perhaps the most exciting wines of the week - Lobster tail must taste great after a week of filet mignon, too.

So, where does all this leave us?  On the hunt for the pockets of value we know to exist in Napa Valley.  Yes, they're rare, but not quite Sasquatch rare.  Stay tuned as we turn up the heat on finding winemakers who can - and do- put out some extraordinary wines inside the pricing stratosphere.
cabernet napa other