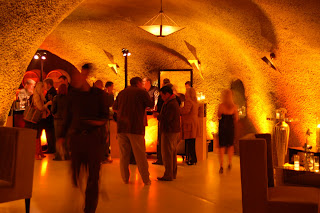 Keeping It Real in the SLD - Two From Steltzner

This past February Allison Steltzner and Tim Dolven manned Steltzner's pouring table at the uber-hip Stag's Leap District wine lounge, hosted in Pine Ridge's caves.  Seeing the comfortable and relaxed way these two joke with each other, it's clear they enjoy a fun workplace.  Tim's (Winemaker) approachable and laid back demeanor were almost out of place at the high-falutin affair, as was Allison's (National Sales Director) contagious, beaming smile and equally infectious energy (please be sure to see Allison's comments below)...

It was, you see, a gathering of some of the wine world's heaviest hitters - Chimney Rock, Shafer, Clos Du Val, Terlato, and others.  And while the wines at this event represented the highest concentration of quality, you couldn't help but want to just hang out and talk to Allison and Tim.

Incredible shit is being made in this region - and not just the weed - but like primo Humboldt , Stag's Leap also has the lofty prices to go along with the reputation for quality.  Steltzner, however, seems to be the (relative) voice of reason in this very high rent district.  Where the ground floor of their neighbors' Cabernets fetch upwards of $60, Steltzner's SLD offering is $40 and the Claret (Napa Valley) retails for under $20.  They were kind enough to send us samples of these two of wines for review.

If you've had SLD Cabs, then the Steltzner is textbook stuff.  If you haven't, they are elegant creatures indeed.  Much like Barolos, Brunellos, and Burgundies, the entry point for quality is around $40.  Anything lower and it's likely to be a runt.  If you have a taste for this character of wine, it can be worth it.

2006 Steltzner Cabernet Stag's Leap District $40
A wine that holds its own amongst its neighbors.  Open 8 hours before tasting, it needed every minute of it.  But shazzam!  The unwinding of this bottle is like the ebbing of workweek into weekend - relaxing into a more comfortable state.  Its texture is like breezy silk.  Though the fruit intensity is middle-of-the road, it does get bigger over time.  Would love to have tried this after a full 24 hours open.  Alas, this wine lures you in like Annette Bening's eyes and not a drop was left late on day two.

2007 Steltzner Claret Napa Valley $18-ish
Not at all what you'd expect from a California-grown Bordeaux blend.  Sharing the same must-twinged palate that many common Bordelaise wines have, you'd swear this wine is French.  Softens on day two to express a little character, though tannins are stronger.  A disappointment next to the SLD Cab, but at least it's at half the price.

Footnotes: Allison Steltzner made the follwing comment for this article: "Our Cabernet is Estate Grown – we’re doing it grape to glass – [which] makes the $40 dollar price tag even better.  [The] Claret is a classic Cab blend – 68% Cab Sauv, 12% Cab Franc and 20% Merlot – I will chime in and say that for the money it is a five star wine- pretty great complexity for under $20.

Steltzner also produces a few unusual varietals - usually an indicator that someone has an eccentric streak, a good sense of adventure, or both.  Among the line up are a Rose of Syrah, a Sangiovese, a Malbec, a Pinotage (apparently the best seller at their tasting room), and a Port made from Merlot.  Very cool.
blend cabernet california napa stag's leap steltzner