Not For Novices - The Wines of Andrew Murray 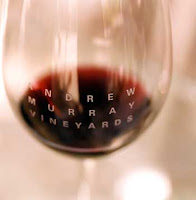 Andrew Murray is a winemaker based in Santa Barbara county's lovely rolling hills north of Los Olivos.  He specializes exclusively in Rhone varietals and blends with a focus on Syrah.  The wines reviewed here are our first introduction to his wines which are distributed nationally - and worth seeking out.

Categorically, these are not wines for the beginning wine drinker.  They are interesting, provocative, quality wines which have a story to tell.  And it's a story other wines don't have.  Damn good stuff.  But (and that's not a there's-a-downside-to-them 'but') they are different.  Consumers, very generally speaking, have come to expect a certain fruit-driven flavor profile from California wines.  Thankfully - and much to their benefit - these wines do not fit that profile...
Before reaching for the ubiquitous term, the question has to be asked: what the hell does earthy mean? Dirt? Mulch? Decomposing leaves? Clay? Mud? You hear the term all the time at restaurants and retailers like it's one of a small handful of multiple-choice descriptors handed out during wine training. Whatever it means, these wines make you think earth. Specifically, about the earth - land, the slope, the breezes, the schist or loam or gravel - in which the wines were grown.
That's more a testament to the wines' honesty and authenticity than their specific flavors.
Often times when we taste wines for review - even good ones - they come and go, quickly getting lost in the mix of a constant stream of variety and the busy-ness of life.  Andrew Murray's wines, however, have been haunting; their character lingering for weeks and the reason for spending extra time in the "Other" section of retailers.  Sure, we'd like them more if the prices were $5 less a bottle, but that's just the cheap-skate talking.  These are worth every penny.
Full disclosure: These wines were received as press samples from the winery. 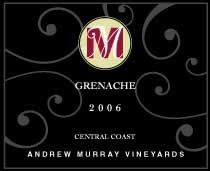 2007 Grenache Paso Robles $30
Deep, ripe, concentrated nose that says, "Ooooohhh...you're going to love me".  Putting this wine in your mouth is like sliding into a warm infinity pool.  Medium-bodied and feminine.  Bright aromatics, but - in seeming contrast - a long, lingering, succulent finish.  This wine has a strong funk factor (Andrew's not going to like this because he thinks we ought to leave the funk to the French) but it's George Clinton funk, not weird cheese funk.  A wine that might start out odd, but ends up irresistible.
2008 RGB $25
A blend of Roussanne and Grenache Blanc. Light straw in color and slightly racy nose; morning sunshine with a cool breeze. Immediately interesting and complex without being demanding or challenging, it shares the same supple texture as the Grenache. An exciting white wine. Delicious and graceful. Like the others, a wino's wine. As it reaches room temp, the voices of the different varietals get louder and louder and the early purity of this wine gets drowned by the din. Best drunk right out of the fridge.

2007 Esperance $30
A GSM blend (Grenache/Syrah/Mourvedre) that needs time decanted.  There's that funk on the nose again, but with some seriously fast heat.  Marvelous cornucopia of flavors coming at you.  Sinuses alive!  All kinds of deeply scented herbs and game meat.  Somehow it works, but again, not for the casual suburban housewife Pinot Grigio drinker.  Almost too much of a wine to handle on its own, but comes alive with grilled food.

2001 Syrah Santa Ynez Valley Hillside Select Reserve $30
We came across this wine serendipitously the day we finished writing up the previous three wines.  Discovered at a gem of a wine shop, they had picked up the cellar of some unfortunate bastard who, buckling under hard times, sold his collection to the shop.  Kept in a temperature controlled cellar, the bottle was in terrific shape and - hell, for $30 (the current reserve goes for $50), why not?  We're glad we did.  The wine is holding up just fine.  In contrast to the other wines in this tasting, this one is less rambunctious and more refined.  A distinguished wine that speaks softly and carries a big stick, it whispers its power in baritone.  A real treat.
andrew murray grenache mourvedre murray roussanne santa barbara syrah