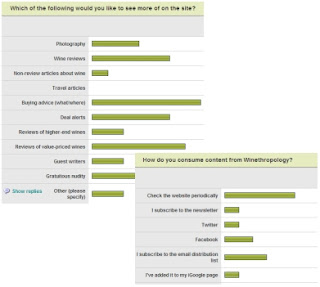 Well, well, well.  It isn't over yet, but it looks like there are a lot of you out there who like the idea of free booze.  Fantastic.  Keep those surveys pouring in.  In the meantime, some of you have questions or made comments that are worth responding to out in the open.

Oh, and if you haven't already, get your survey on, people.  There might be free booze in it for you.

On the question of the 5 star rating system, one respondent said, "Please don't use the 100 point scale. I mean seriously, what really distinguishes an 88 point wine from an 89 point wine? I think the star system is more concise."  Interestingly enough, there is a lot of discussion in the wine writing world about this these days.  Even within reviewers employing the 100 point scale there is no real consistency in the way value is attributed to points, or even with where the low end is.  However, wine producers LOVE this (as long as they're getting good ratings) as it provides many consumers with a delineation below which not to buy.

On the question of 'Which of the following features would you like to see added to Winethropology?'  someone suggested "How about a audio podcast for commuters with show notes on the site."  Great idea.  We have given that some consideration along with video reviews (which a lot of other reviewers also do).  The sad fact is that it is incredibly time consuming and it would be in addition to the writing, not instead of it.  After taking a course on podcasting and video shoots earlier this year, we learned that the post-production editing is a HUGE time sink.  But stay tuned as we may do some of this in the year ahead.

On the question of 'Which of the following would you like to see more of on the site?', there seems to be a strong leaning towards the 'Gratuitous nudity' option.  Alas, this website caters to vices vinous in nature. Those looking to combine the appreciation for God's handiwork in nature (aka the human body) with wine should do so in the privacy of their own boudoir, kitchen, or laundry room - or whatever you're into. That option was included in the multiple choice to see if you were awake - and clearly you are!  One respondent to this question commented, "Qualifier on the gratuitous nudity -- just not of Steve, please! :-)" Not to worry, not to worry.

A suggestion came through that "...it would be really helpful to have the reviews categorized by varietal and year."  Another terrific suggestion.  Thanks.  What we really need is a better search engine and database structure to not only arrange by vintage, varietal, etc., but also by producer, region, and whatnot.  The trick is finding one to integrate with the blogging software.  We're going to be looking into this more in the weeks ahead.

Another request for "...More Zin reviews! (Just a hope - I have an unhealthy obsession with big Zins.)"  Hey, pal, we all have unhealthy obsessions.  If big Zins is as bad as it gets for you, you're doing better than the rest of us!  You're also in luck as we have a batch of reviews for wines from Norman Vineyards - a well known producer of Zins from Paso Robles.

Finally, we had some encouraging words on the subject of negative reviews.  Zero respondents (so far) have said that they'd like to see fewer negative reviews.  One participant went so far as to say this: "I like the negative wine reviews. What's wrong with being honest of that is how you really feel? Too many things today are sold to the consumer as being good, when a lot of it is crap. I thoroughly enjoy your site. The wines I've tried based on your reviews have been spot on. I think you're on the mark when it comes to assessing a wine, so if some wineries make crap wine, i think it's your responsibility to tell the consumer. It keeps me from spending my hard earned money on crap. Maybe most winemakers, like a lot of businesses think consumers are too ignorant to tell a good product from bad. I like that your site covers a variety of things related to wine. Keep up the good work.'

What do you think?
other survey