on July 02, 2010
Pink = Boobs? Not Necessarily
Bottom line: It's hot and you're ready for something different.  Man-up and try some rosé on for a change.  Particularly from southern France for low-risk/high-reward libations.

The Rest of the Story:  It's hard to complain when it's for such a good cause, but it does seem like we're beyond the saturation point with all the breast cancer awareness stuff.  Every city has the Race For The Cure (awesome), cars have those pinks ribbons, and even some men now wear those T-shirts that say "SAVE THE TATA'S!"  And so the Susan G. Komen Foundation immediately came to mind when opening this six-pack of pink wine.  Though as we soon learned, this six-pack had nothing to do with boobs...

The good people at Frederick Wildman & Sons sent us what has to be, the best, most attractive collection of sample wines we've received from any one source to date.  Not because they're all outstanding wines (though some are), but all are different - stylistically and geographically - and all are more than fairly priced.  That's a refreshing change of pace.  (And if you want to associate boobs with pink wine, well, there's nothing wrong with that.)

From a timing standpoint (summer is well under way and rosés are in full force vogue), it couldn't be smarter.  Not to mention, just look at these bottles... 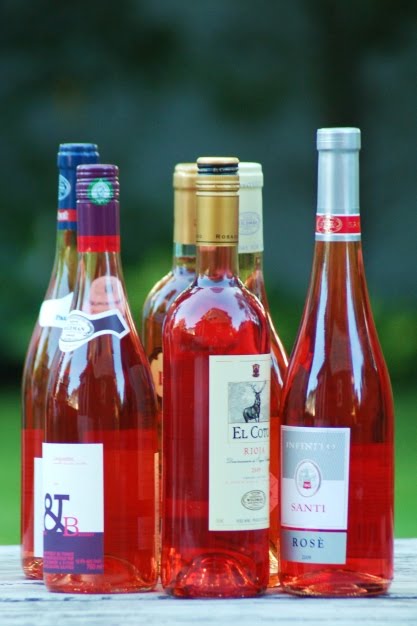 As an importer, Wildman's collection is all international, and so it was with this line up: two from Italy, three from France, and one Spaniard.  Of all the tastings we've done this year, this was among the most fun thanks to the diversity and surprises.
The French know how to make a great rosé - and at an easy-going price.  But the Rioja really threw us - in a good way.  The Italian delegates were less consistent, with one seeming like, well, you can read the reviews yourself.
2009 El Coto Rosé of Tempranillo and Grenache Rosado Rioja $10
Super pink! I love this wine. Not because it's anything mind-blowing, but because it's so unashamed - and unashamedly PINK. It looks pink and tastes pink. Refreshing and just a bit of sweetness, but finishes dry. Yum. Delicious. At this price it's just silly not to take your skirt off and get some. Warning guys: You must be secure in your masculinity before attempting to drink this wine in mixed company.

2009 Paul Jaboulet Rosé Côtes du Rhône P45 $12
From the venerable Rhone producer comes another sexy bottle.  Nothing challenging, but - wow - there's an interesting layer of complexity here.  Fast flavors delivered in a lighter body and a dry finish.  The nose is spicy with fresh flowers and grassy-ness.  A lovely wine you won't want to put down.

2009 Pascal Jolivet Rosé of Pinot Noir Attitude Loire Valley $16
Diluted color with more peach than pink.  Mold under the capsule was cause for some concern over the integrity of this particular bottle.  Lots of acid - maybe too much - on the light-medium frame and long aftertaste.  Not the most appealing structure of the line up, but would probably be good with a cold fish dish.

2009 La Scolca Rosa Chiara $16
"La Scolca" must be Italian for "The skunk".  Has that odd homemade brandywine color in the glass - peach with a hint of beige.  Smells like something infused with artificial watermelon flavor.  Thin, insipid and, um, cheap tasting.  Lingering chemical aftertaste reminiscent of Bartles & James.

2009 Santi Rosé Infinito $11
Electric red-tinged pink, more deeply hued than all the others.  Clean nose.  Light to medium-bodied with subtle red berry fruit flavors that develop on the long, dry finish.  Very balanced acid and fruit.  Not necessarily a food wine, but would probably stand up to lighter lunch fare.  Almost too easy to drink.