A break from the Blackberry, time away with the family, a chance to see old friends, a much-needed change of scenery...it helps remind you of what really matters in life.  But my summer vacation comes with a huge bonus: in-laws.

While many groan at the idea of having to punch the ticket with their spouse's family, I can't think who else I'd rather spend vacation with.  Get this - they're wine lovers, too.  And so it is that when we get together, the evening cocktail hour arrives and out trot some incredible wines.  This week, we've also had the good fortune to purchase wines in a market we normally don't have access to - more on those later in the week.  But the real treat has been the generous stream of wines from Vincent Arroyo...

Vincent was a Silicon Valley guy who turned winegrower back in the 70s.  Known primarily for his insanely concentrated Petit Sirah, he - now with more than a little help from his daughter - turns out around 8,000 cases a year.  So well regarded is Mr. Arroyo's wine that all of it is sold directly mailing list customers on futures and to visitors.  Over the years we've had the chance to enjoy many, many of his varied wines.

This alone is reason enough to lead a grateful existence. 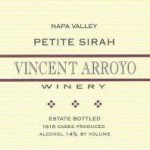 This week we've breathed in fresh mountain air while drinking his 2008 Chardonnay, scarfed down grilled burgers with older vintages of his Petit Sirah, and even enjoyed an older of his Cabernets.  Life is good.  Given the age and scarcity of these wines, giving them the standard review treatment would merely serve to tease you.  Instead, let's just offer some observations that will hopefully guide you in your endeavor to drink better and better wine:

First, Vincent's wines all share the same thumbprint - or personality.  Not that they've been over-handled (they haven't), but when you taste one of his wines, you know it.  This is probably as much a reflection of his farming as it is his winemaking style - and talent.  This consistency must be an enviable trait amongst his peers.

His reds are ageworthy.  Very worthy.  In years past we've had 15 year old Petit Sirah that feels like it's still in its infancy.  This week we had 2001 and 2002 Petits and they, too, are just barely hitting their stride.  But that doesn't mean they aren't good.  The 01, now 9 years from harvest, is a big, dense, tannic monster with the stuff to go a couple more decades before revealing all its future has to offer.  The 02, the more accessible of the two siblings, is magnificent - aromatic, serious, and lovely all at once.  We also popped a 2001 Cabernet, which really deserved its own showcase (tough to appreciate fully after subjecting your palate to the Petit Sirah treatment).  Again, a wine that will go the distance in terms of years in the bottle.

It's a great place to visit.  Next time you're in the neighborhood, give them a call and let them know you'd like to drop by.  An operation of their size if a fun thing to see - it's a more relaxing alternative to the jam-packed, high-pressure tasting rooms that have become the norm in Napa.  This is also one of the few places you'll enjoy a relic of times past: the complimentary tasting.

Finally, at least in the context of quality and place, these wines are a relative value.  Most of his wines are in the sub-$30 range.  And you'll be the only one in your neighborhood with this wine.