A New Approach To Rating Wines

on August 26, 2010
Paul Mabray, Chief Strategy Officer and Disruptor at VinTank - a digital think tank for the wine industry (whatever that means) has proposed a new system for scoring wines: badges.  The gist of it is to abandon the numerical ranking of wine and instead use badges to characterize the wine.  Interesting idea.
A handful of bloggers have latched on to the differentiation bandwagon and have come up with some crafty badges.  Each uses their own, so it's not a communal, standardized thing...It's more of a buck-the-trend-and-get-funky kinda thing.  Cute.  Funny, even.  But that's not to say there isn't a real, substantial point to these - there definitely is...
The critiquing world needs to attribute more than just numbers to a wine.  Clearly a monolithic representation of anything qualitative is unfair at best, but more realistically, useless.  That's why it's so important to actually read reviews written by someone whose perspective you share or value - and not just go by the numbers.
Anyway, these guys are pretty creative, so you've got to hand it to them.

Here are a few favorites:
From Notes From the Cellar comes "Legit Juice — Just an awesome wine, all around, regardless of the style. Really, among the best of the best there is."

And from 1WineDude, the hilarious "Kick Ass: A wine that totally and utterly kicks all kinds of ass. I mean, really, do I need to explain this one?  Typically these will be “bigger” wines than those in the elegant category, but the essential element is that they are full of intense awesomeness."

We don't have any plans to change our star rankings anytime soon, but it might be fun - even for a day - to jump in to the fray here with some badges of our own.  Since all the aforementioned already cover the smiley-happy end of the spectrum, here's our entre to the, er, less glamorous end of the badge scene...

The Slacker:  A wine that starts flat, barely gets off the couch, fails to impress, and has a slow, lazy, and ultimately forgettable finish.
The Fraud: Wearing a misspelled first growth label and claiming an impeccable provenance, this ballsy little fucker more likely came off Canal St. than any collector's cellar.  (Fine print written in Cantonese.)

Señor Poser: So hopped up on oak chips, you can practically smell the fumes from the gas-powered mulcher they backed up to the fermenters.  Back label written by an out-of-work realtor in Fresno.
The Ho: An easy, cheap, and fast screw top. You can pick this wine up pretty much anywhere, use it, and drop it off at the nearest street corner. Bouquet? That's disgusting. 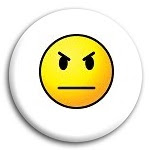 Le Malcontent: Closed, tightly wound, and with muddled flavors. Highly tannic and out of balance. Grumpy. Most likely French.


El Dicko: Made be an egomaniacal winemaker who fancies him/herself the second coming of André Tchelistcheff.  This wine may have incredibly redeeming qualities, but you just can't get past the idea that drinking it would be putting money into that asshole's pocket.

Da Douchebag: This special rating is reserved for simple, uninspired wines of anonymous origin and limited depth.  Typically still in their adolescence, these wines are usually accompanied by large bottle neck hangers displaying only a two digit number - ostensibly the wine's score, though the reviewer's identity is unclear.
badges other