on August 08, 2010
It's summer time.  Salmon is smoking on the grill and family is around the table.  What to open, what to open?
A handful of Pinots get cracked.  Different vintners, different appellations, different vintages.  How'd they do?  The answer may surprise you. 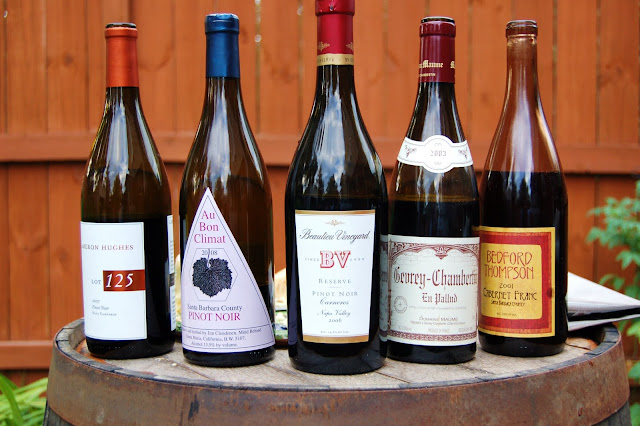 We'll take them left to right.

The 2007 Cameron Hughes Pinot Noir Carneros Lot 125 ($19) is one we've reviewed here before.  We liked it then, but the thing is, it's gotten better.  Smooth as hell, sumptuous, and giving.  And all around winner with finesse, body, softness, and character.  The first bottle to get drained, which speaks volumes about the wine - especially when these others were all within arm's reach.

2008 Au Bon Climat Pinot Noir Santa Barbara County $20  Another in a long line of winners from Jim Clendenen.  The regular SBC Pinot is nothing approaching the experience of some of his single vineyard bottlings, but this vintage is much improved over the 07.  Straightforward, honest, SBC fruit made for an uncomplicated drink.  Good stuff, but perhaps lacking in personality in this crowd.

2006 BV Pinot Noir Carneros Reserve $20 (on sale, normally $45)  We've had this wine before - and raved about its silkiness and bold-but-beautiful flavors.  At $20 it's a freaking steal.  We actually opened two bottles of this and found them to be very different.  Same winery, same varietal, same vintage, same label, same everything. Bought at the same time in the same place. Pulling the cork, though, the wines are definitely not the same. What gives?  Still, one was absolutely terrific.  The confusion over the bottle variation caused some to shy away from this.

Finally, the one we all expected to be mind-blowing; the 2003 Domaine Maume Gevrey Chambertin En Pallud $67 (on release).  This one has been in the cellar for about 5 years.  And since everyone's always taking about how great great Burgundy can be, we cracked it.  And even though we tasted this one first (definitely a different animal from its new world cousins), it was, unquestionably, a let-down.  The aftertaste on the nose was like the underside of a wet log that had been deteriorating in the underbrush of a wooded hillside.  Ugh.

Yes, that last one on the right, the 2001 Bedford Thompson Cab Franc is, obviously, not a Pinot.  But it did do surprising justice to the meal.  Elegant and graceful, it didn't overpower the food as you might expect.

If forced to pick a winner, it'd have to be the Cameron Hughes.  It's just mind boggling to think how much wine you get for the money with this one.  It's hard to believe we only paid $20 - and that it's not completely sold out.
abc burgundy bv cameron hughes carneros pinot noir santa barbara