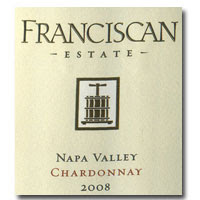 Bottom Line: A throwback Chard and a foray into the modern style of Sauv Blanc.

The Rest Of The Story: (Disclosure: These wines were received as press samples.)  Okay, so it's been a century since the Franciscan monks made wine in Napa Valley, but the Franciscan label didn't just crop up yesterday, either.  Now part of the Constellation conglomerate, they churn out large quantities of wine which you can find in wine stores, grocery stores, and most places that sell wine over $10 a bottle...

Last year we reviewed the 2007 Franciscan Chardonnay and, well, we didn't love it.  So, it was with some skepticism that we approached the 2008.  Chardonnay, it seems, is going through a bit of an adolescence as winemakers try to figure out what style to make this varietal into.  At the turn of the millennium, the en-vogue style was what has become the stereotypical California Chardonnay - buttery and oaked.

The 2008 Franciscan Chardonnay is unapologetically big, fat, and audacious, yet somehow it all works.  Yes, it's yellow, oaky as heck, with a generous dollop of creamy butter - the kind of Chardonnay that gave Chardonnay the ABC reputation.  But, WTF, there's a reason why this style got so popular in the 90's.  And much as Brittany Spears was popular, this in-your-face-wine wine is irresistible.

The Sauvignon Blanc was a new offering to us.  In contrast to the Chardonnay, this Sauv Blanc seems to be striving for its next identity.  The style of California SB that became so well-known is the past decade - green apple, fresh-cut grass, and gentle citrus - seems to be evolving.  At least in Napa Valley.  The trend, it seems, is towards a food-friendly, more acidic and complex rendition of the grape.  Some are doing incredible things with it and others are, well, still working on it.

The 2008 Franciscan Sauvignon Blanc falls somewhere between the two ends of the spectrum.  It's got a faint cloudiness in the glass that clears as it settles.  A big nose with soft, round fruit.  Layered flavors deliver more complexity than in just two dimensions.  The finish is long and pleasing and has a real acidic component that doesn't come at the expense of the fruit.  There's more citrus here than the old style green apple and grass.  It paired well with a spicy grilled shrimp dish.

MSRP on these two wines is $18 and $17 respectively, but Constellation is being very aggressive in the marketplace.  You can expect to find either of these wine for around $5 under list.  And at those reduced prices, both of these wines easily earn 4 stars.