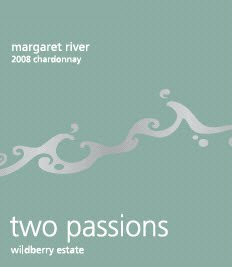 Bottom Line:  The 2005 Chardonnay from this producer set lofty expectations which these wines could not live up to.

The Rest Of The Story:  (Full disclosure: These wines were received as press samples.)  If forced to recall the best Chardonnays we've had in recent memory, Vincent Arroyo, Gallo's Laguna Vineyard, and Wildberry come to mind, the latter being a surprise discovery.

In response to the very favorable review of their 2005 Chardonnay, the good folks at Wildberry Estate sent a bottle each of their 2008 Chard and Cab.  After tasting them, we chatted with their importer, Ken Onish at Southern Starz...

Ken explained that the change in label was nothing more than a desire to reflect winemaker Ryan Aggiss' passions for surfing and wine.  (Who doesn't want his life?)  The sourcing is the same, the production process is the same, and the people are the same.  So why the stark difference between the 2005 and the 2008?  "2008 was a very good vintage in Margaret River, but 2005 was just outstanding." says Ken.  This is fairly consistent with our experiences with Australian wines in general - we just haven't seen the quality levels we saw in 2005 since.

So, the lesson here is to grab some of the 2005's out there.  And there definitely are some, especially at the high end.

2008 2 Passions Chardonnay Margaret River Wildberry Estate $17
From the same folks who brought us the incredible 2005 Wildberry Chardonnay comes the relabeled 2008.  Champagne-colored and crisp-looking, it has an almost effervescent nose with an odd hint of nutty adhesive.  All that fades away after the first sip.  Absolutely farting-through-silk-silky texture.  Medium-bodied with some interesting spice.  Ultimately, it lacks the Margaret River uniqueness we saw in the 2005 - and not as complex and sophisticated, either.  Hate to say it, but stylistically, it's indistinguishable from boatloads of California Chardonnay. Certainly easy drinking - let's not be rude - but, shit, it was kind of a letdown given the high bar the 05 set.

2008 2 Passions Cabernet Margaret River Wildberry Estate $17
Dark and mysterious-looking in the glass.  A slightly soapy nose with gentle fruit aromas.  Lovely texture and very soft tannins.  Flavors, however, are...well, simple.  Lacking in varietal or regional character, this wine tastes like it could be from anywhere.  Pleasant enough, but like the Chard, indistinct.