Notes From the Penedès

on November 08, 2010
Last month we made our second trip to Spain, which served to confirm previous impressions and open our eyes to some terrific new discoveries.  Spatially, Spain is smaller than Texas and larger than California, but as geographically varied as both those states.  Despite covering a lot of ground on these trips, we've only seen a small slice of what this country has to offer.  As a tourist destination, it ranks right up there with Italy.  As a wine destination, well, like I said, we've only seen a slice.
The more prominent wine regions of Spain are well documented, but precious little can be found on the Penedès.  So, on this recent trip we focused on Catalonia, the autonomous community which encompasses Barcelona, and the Penedès and Priorat winegrowing regions.  Barcelona is truly one of the world's great cities.  With a population of close to 5 million and an unbeatable coastal location, it is captivating.  The food, culture, shopping, beaches, style, people, architecture - the list goes on and on - round out a winning combination which we could talk about for days.  Using Barcelona as a launching pad, we made our way to the nearby winegrowing region of the Penedès to explore what this area has to offer.
Bottom Line: Cava is king, and for good reason. It is a luminous beverage capable of profound dimensions, despite its lackluster reputation in the US. The Penedès region is a must if you're a sparkling enthusiast. But for still wines, particularly reds, this area lacks the consistency and depth of character to make it a wine lover's destination.


﻿﻿﻿﻿The Rest Of The Story: Of course, as with wine regions the world over, there are exceptions to this. Viladellops makes a Grenache that sings, Jean Leon makes a Chardonnay that makes you swoon, and there are dozens of producers doing incredible things with white grapes you've never heard of, but there's a reason why Rioja's reputation eclipses wines from Penedès. Most of the still wine from here that finds its way to the States tends to be, well, inconsistent. 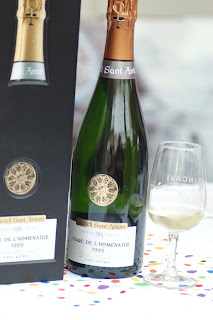 That's not to say they are completely devoid of commonalities, however.  Penedès reds do share a heady perfumed character that's not unlike their Priorat siblings (and many other Mediterranean reds) along with a lean, almost austere body profile.  Generally speaking, the red wines lack generosity.  As for the exceptions, only a few make their way out of the country.

CavaHowever, if you enjoy bubbly - wow - there is more than just depth and consistency here.  There is variety, quality, and value in a class of wines the world is missing out on.  Dozens of small, family-run producers are putting out extraordinary Cavas.  Castell Sant Antoni is one such example.  After meeting the proprietors at a Sunday market in Barcelona's Barri Gòtic, a gate swung open onto a whole new, fascinating world.

Though their entire production is less than two thousand cases per year, Sant Antoni manages to turn out nine different bottlings, four of which they poured at the mercat.  Their offerings range from the reasonably priced and refreshing Primus Primum, to the richly colored and flavorful Gran Rosat of Pinot Noir, to the stunning flagship 1999 Torre de l'Homentage.  But once again, none of it is imported to the US, a challenge the producers we spoke with attributed to high importers' fees and a US market reluctant to spend even moderately on Cava.

Visiting WineriesSure, the big Cava houses - Frexinet, Segura Viudas, and Codorníu - are very prominent here, but the real jewels are the places dotting the towns of Sant Sadurni d'Anoia and Vilafranca del Penedès.  Their charms can only really be experienced by visiting, and visiting wine country here is not the casual drop-in we're accustomed to in the US.  Reservations are required virtually everywhere, are only available during very select hours, and can be tough to get.  The highly regarded Gramona, for example, was not able to accommodate our request for even a brief visit.

Though dozens of wines were sampled over the course of these trips, a tasting of Celler Pahí's red blend exemplified this incoherence.  A lineup of their Gaubana from 2005, 2007, and 2009 shared very little in common, despite being sourced from the same vines, blended by the same hands in similar proportions, and subjected to the same oak regimen.  While there's nothing wrong with diversity, I can't help but wonder if the area's reds aren't suffering from an identity crisis.

With the sometimes inconvenient formality of prearranged reservations, though, comes an intimate experience that translates easily to quality over quantity.  The rhythm of a day in wine country here is simple: one winery in the morning, a long, languid lunch, and one winery in the afternoon.  There is a civility to this which cannot be disputed, no matter how anxious you might be to cover more ground.
The geography in the Penedès is also a departure from the pristine vistas that typify wine country in most parts of the world.  Known better for the prelitoral mountain range in the distance, the terrain in the Penedès is actually coarse, sprinkled with industrial enterprises, and lassoed in transmission lines.  Not exactly postcard perfect.  But it's easy to forgive that when the region produces many seriously enjoyable Cavas - and the food is no less sophisticated that what you find in major gastronomic capitals.
An hour drive from Barcelona's harrowing traffic, the Penedès region is also easily accessible by train, though ground transport can be tricky if not arranged ahead of time, so, again, it's worth planning ahead.

Food
A sudden stomach illness dashed our pre-planned day with the Torres people, so when we did finally make it to the Penedès, we were adrift in the streets of Vilafranca at lunchtime. Whether our experience is reflective of dumb luck or a high bar this community sets for all food, our mid-afternoon meal was nothing short of spectacular.  The aptly named El Racó de la Calma (The Corner of Calm), a tiny spot at the end of a narrow passageway, was God sent. Our 14 Euro price fix meal included a glass of cava, an amuse bouche, two courses, dessert, and a glass of wine. An appetizer of thinly sliced baby eggplant layered with a ragout and covered in a creamy parmesan sauce was sweet deliverance amid a parade of flawlessly executed dishes. Much to the other diners' amusement, I teared up over this gift of a dish.  No joke.
That lunch was the culinary highlight of this most recent stay. In close second, was our dinner at the punitively expensive and comically old-world-formal Botafumerio, where, for five times the tab we feasted on seafood so honest it was more transported to the plate than fussily prepared. Really, though, five times?

Ultimately, however, there are two disturbing traditions in Catalan cuisine: bread and salt. Tapas and pintxos make for a fun eating format and efficient sampling, but it doesn't take long for the ubiquitous slices of baguette sitting under prize morsels to turn into obstacles. As for the salt, it's upsetting to it see so heavily used in a part of the world that doesn't need it.  The ingredients available here are intense already and need only respect to deliver pure flavor.

Brief Tangent
On the opposite side of the country sits the Basque cultural capital of San Sebastian.  A sophisticated surfer's paradise, this city of 200,000 is home to the most remarkable meal we've had in Spain to date.  The basement dining room of Bodegón Alejandro was the scene - a place which proves that sophisticated and inventive meals can be executed flawlessly, even in humble surroundings.  Dinner here delivered two bests: steak and dessert.  The beef chop, fire-charred and dusted with ash, seared its flavor into our memories for perpetuity.  Besides being skillfully butchered and grilled, it was a soul-stirring reminder of what beef really does taste like - something we lost sight of long ago here in the US.  The pineapple infusion with coconut ice cream and chocolate was an exalted form of culinary art and architecture in miniature.  The poshest chefs in Manhattan have got nothing on the working cooks here.  Any return to Spain will bypass Madrid and Barcelona in favor of an expedited arrival in San Sebastian.  The food alone is worth a stay, but it's the city's style and charm that has earned it a spot atop our wish list of places to have a second home.
﻿
﻿Wine Reviews
Below are brief reviews of some of the more noteworthy wines we sampled.

Txacoli (pronounced chah-co-LI) Found in all Basque bars, regardless of the city, txakoli is a frizzy and refreshing light white low in alcohol but high in fun.  It's just beginning to make in-roads in the US thanks to wider recognition of how enjoyable it is, but it's still tough to find, so grab any brand you can find.  Generally under $15.
﻿﻿
2004 Beronia Rioja Reserva Outstanding balance and finesse in an elegant package.  Close to a perfect Rioja with all of Tempranillo's graces and none of it foibles.  Terrific value as you should be able to find it for under $20.

2008 Viladellops Grenache Solid core of dense fruit, seamless and hearty texture, and nicely integrated oak.  One of the least expensive, but most enjoyable, wines tasted in Catalonia.  $17-ish.

1999 Catell Sant Antoni Torre de l'Homentage A magic carpet ride across the low hills outside Sant Sadurni, through the vines, and underground into the cellar.  Captivating, challenging, and thought-provoking.  Channels provenance and skilled winemaking.  Exceedingly high quality.  About $75.

2007 Jean Leon Chardonnay Think massive, high-end California Chardonnay with a French kiss.  Barrel fermented, so the oak is strong, but kept in check on both sides by intense fruit and acidity.  A big deal wine.  $23-ish.

2006 Celler Pahi Gaubanca Blanc A blend of White Grenache and Macabeu grown on slate-covered hillsides. Intense aromatics, medium-bodied fuit, and a long, long finish. Insanely complex. Mature, but not sagging one bit. As interesting as it is delicious. About $15.
2006 Jean Leon Merlot Light color and translucent, lovely warm nose, but the fun stops there.  Sharp, alcohol attack and the fruit hits a low ceiling.  Ouch.  $21
2004 Gramona Gran Cuvee We were unable to put our hands on Gramona's higher-end bottlings which are reputed to be stunning.  So, this was a surprising disappointment from the venerable Cava house.  Simple, one dimensional, sweet, and cheap tasting.  $18
﻿﻿﻿﻿﻿﻿
﻿﻿ ﻿﻿﻿﻿﻿
spain travel