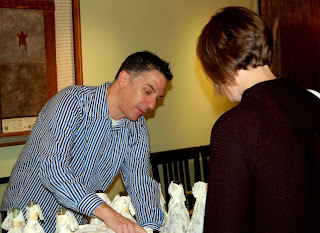 What do you get when you mix kick ass wine, kick ass people, and a kick ass cause?  A win-win-win (or maybe it should be win-win-wine.)
Whatever you want to call it, last night's Best Of Tasting/Fund Raiser was a terrific success.
Win #1: Attendees were treated to seven flights of wines, food, a silent auction, and door prizes.
Win #2: Participating wineries were introduced in a very positive light to a captive audience.
Win #3: Perhaps the biggest win, the Food Bank got a big check at the end of the night. Winners in each category were selected by popular ranking.  No one left thirsty - or empty handed.  (Check out the silent auction items here.)
Before getting into the final tally of winners, let's give it up for everyone who made this event possible... 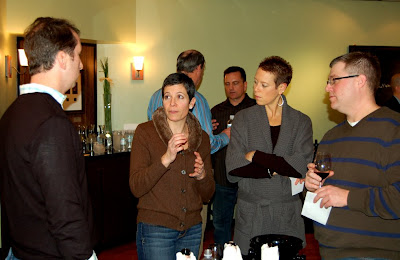 Sauvignon Blanc - In a runaway victory, the 2010 Cupcake Marlborough Sauvignon Blanc ($9) took first place: Zing! Youthful, zesty, and super bright, it collects its $200 and blows right past go. Ultralight Champagne color and a nose like lilacs on a cold spring morning - muted, but hinting at what's to come - it is unapologetically alive. Expressive fruit not kept in check by anything, but the semi-tart acids are along for the ride. Not for fans of the subdued or mellow, fresh-cut grass meets citrus bowl in a salivary gland-stimulating extravaganza.


Chardonnay - Heavyweights Mondavi Reserve and Gallo Laguna Ranch were handily beat by - what??? - Kendall Jackson's 2009 California Chardonnay? Unbelievable! Close to two million cases of this stuff are made every year. No wonder you can find it at pretty much any grocery store. And at less than half the price of its competition in this contest, what's not to love?

Pinot Noir - Frankly, the toughest category to pull together also brought a surprise. The 2009 Pinot Noir from Blackstone's Sonoma Reserve program ($18) was the winner by the biggest margin all night. Full throttle fruit and body, 75% of the fruit is from Sonoma and 25% from Napa. Hard to beat at this price and, again, available at the grocery store. 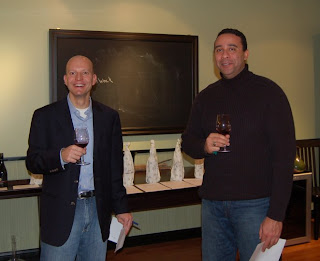 Zinfandel - It was a much tighter race for Zins with all three wines scoring within 5% of each other. The 2007 Lake Sonoma Winery Zinfandel Dry Creek Valley ($15) barely won out over the Quivira Zinfandel ($20) from Dry Creek Valley with Klinker Brick's Lodi Zinfandel ($20) bringing up the rear. But it should be noted that this flight drew the strongest responses from the tasters - all of these wines were enjoyed.

Merlot - Receiving the fewest votes of any flight (thanks, Sideways), the Merlot rankings were pretty uniform - and turned the price/pedigree equation on its ear.  The 2008 Crusher Merlot Clarksburg Wilson Vineyard ($18) was a runaway favorite, surprising the cognoscenti.  In solid second was the 2007 Milbrandt Merlot Columbia Valley ($17).  And well in third was perhaps the most critically regarded - and certainly most expensive - of the flight, the 2006 HALL Merlot Napa Valley ($28).

Cabernet - In what was perhaps the biggest upset of the night, the Cabernets (the most expensive flight of the night) also drew the most disagreement.  Tiny underdog (and personal favorite) Albeno Munari took the trophy home for his (least expensive by a long shot) 2006 Cabernet from Calaveras County ($26).  Newsletter subscribers will recall the June issue urging readers to keep an eye out for this winery.  Go Al!  In second place was Snows Lake Vineyard's 2005 One from Red Hills ($45).  Next in line was Gallo's 2007 Frei Ranch Vineyard Cab ($40) followed by the 2006 Robert Mondavi Reserve Oakville ($45).  Honestly, this was the biggest shocker of the evening.

Syrah - Finally, the deepest, darkest, and most varied lineup of the night yielded the most love/hate rankings and turned the price/ratings on its side.  The massive fruit of Klinker Brick's Farrah's Syrah ($19) appealed to most, earning it first place.  The 2006 Zaca Mesa Syrah Santa Ynez Valley, in stylistic contrast, was runner up.  Finally, Andrew Murray's 2007 Syrah Terra Bella Vineyard, almost unfair to drink at this age, was the favorite for some, but not enough to leap frog the others.

The silent auction items were a popular hit with all finding generous supporters to go home with.  Again, HUGE thank to all who came out to the event.  It was a great time and we look forward to doing it again! 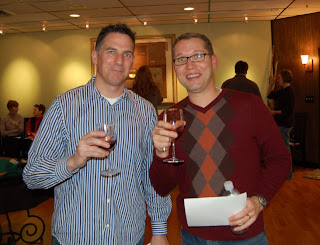