on December 26, 2010
Two Pinots From La Follette
Bottom line: This new line of wines is steeped in high-end winemaking tradition and religious respect for the vineyard that yields extraordinary results.
The Rest Of The Story: Let's not beat around the bush here. Trying to find a good Pinot under $30 is like joining the search for Sasquatch, but given the incredible heights Pinot can reach, it's a search worth joining. Still, it's only for the thick-skinned - it's a lonely journey full of disappointments. But not today.

When Pete Kight, owner of La Follette, sat down with us back in August, Greg La Follette's name came up a number of times.  After complimenting his winemaking discipline and philosphy, Pete recounted an interesting challenge he put to Greg about Pinot Noir: 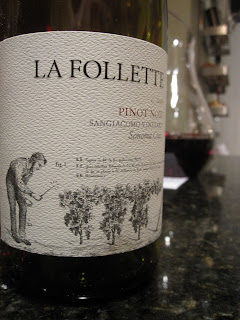 "...after a couple of discussions he began to realize that I was serious that I wanted a really great Pinot at $29. His first reaction was, 'You can’t do that', but then there was that second meeting when I kept pressing and talking about how 'There is no great wine at any price if no one is drinking it. And those $60-80 Pinots aren’t going to get drunk.'.  Probably the biggest insult I made to him was that I said that 'I could buy the best Russian River Valley grapes at a $5000 a ton and turn them into great Pinot. And I’m not a great Pinot winemaker. Can you take grapes at a price that enables us to sell for $29 and make a really good Pinot? And can you make a genuinely great one at $42?'  That is talent. And you could see, literally, I swear, at that exact moment there was a glint in his eye and he sits back, then leans forward again and says, 'Can we go Sonoma Coast instead of [Russian River]?' I said, 'You tell me where it is we have to go and we’ll get it.' And all of a sudden the bit was in the teeth and he was off running."
Off and running, indeed.
The 2008 La Follette Sonoma Coast Pinot Noir, ostensibly the entry level Pinot from this Burgundian line up, is nothing short of an exhilarating experience.  The deep, Nebbiolo color is darker than most Pinots and more opaque; mystery brooding beneath the surface.  You know you're in for a treat when you stick your nose in the glass, something I found myself doing again and again, lingering inappropriately, inadvertently pulling as much as possible from it in olfactory frequencies.  Then comes the joy ride.

The slight acidic bite on the attack is short-lived before you're pressed into the bottom of your seat by a blur of sensations, racing, dancing, teasing, and satisfying.  Beautifully focused fruit is delivered in a straightforward texture with enough body to deftly carry the 14.6% ABV and the finish is a country mile long.  This rapid-fire assault on the senses knocked me off balance as my mouth tried to keep up with layer upon layer of voluptuous flavors, and my thoughts strayed, trying to remember how long it had been since I felt the nervousness of a first date and asking myself why I was even trying to recall that memory.
Yeah, it's that kind of a wine.

Pinot Noir is a silly obsession for many, an obsession which seems almost reasonable with this wine in your hand.  Is it the best Pinot I've ever had?  No.  But it is quite possibly the most exciting, enticing Pinot I've had the better part of this year.  And at $30, it's no cheapie, but considering the joy ride, that's more than a fair fare. 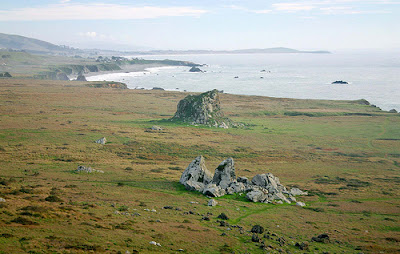 A study in stylistic contrast, the 2008 La Follette Sangiacamo Vineyard Pinot Noir is a delectable splurge for fans of subtlety and nuance.  That said, there's nothing shy about the quality beaming through this lovely wine.  Feminine, almost delicate, and coy, the vineyard is faithfully channeled in every drop.  Lighter-bodied and insanely balanced, notes of funk, button shroom, and rough brush conjure images of the Sonoma Coast's unforgiving terrain - a curious juxtaposition to the serenity in this bottle.  Altogether wonderful. $40.

Big congratulations to Greg for rising to Pete's challenge - and blowing away expectations.  More comprehensive tasting notes on all of La Follette's bottlings can be found over at Fred Swan's NorCalWine.
get la follette pinot noir sonoma