Baby, It's Cold Outside: Dessert Wines Round Up

on January 27, 2011
As winter's cold grips the northeast and much of the rest of the country, visions of quiet nights by the fireplace dance in our heads.  This is prime season for dessert wines.  In this roundup we including some terrific Ports, but also cast the net a little further to discover some gems from unsuspecting places.  So, on your way home tonight, stop by your local wine monger and pick something up to cuddle up with that blanket.  (Disclosure: most of these were received as press samples.) 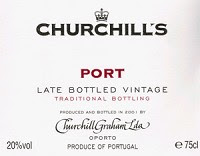 2002 Churchill's Late Bottle Vintage Port $25
Now, here we go!  Luxurious in the glass - regal, shimmery, and welcoming - like that family restaurant your parents took you to on special occasions.  Yes, this is classic Port.  Quintessential syrupy love, comfort, and raisiny embrace characteristics.  Is this the best Port ever?  Of course not, but it is the embodiment of all that is soul-affirming about this rarefied pleasure.  Delicious.  Pairs perfectly with macaroons and lingering conversation with good friends.

NV Quinta do Noval Porto "Black" $20
Recently included on Sommelier Journal's top picks for 2010, this is a new kind of animal from Portugal.  Stylized as either an aperitif or postprandial dram, it's a modern, California-esque rendition of vintage Port.  Glamorously packaged in a stealth bottle, it looks and runs like slick Vintage in the glass - deepest ruby and with legs like Elizabeth Hurley.  Despite it's blackstrap appearance, the taste is subdued compared to its monstrous Vintage siblings.  Think a slightly drier version of Port, not unlike what many northern Cali winemakers make in limited quantities from late harvest Petite or Cab.  Still, the Black doesn't lack flavor - or accessibility.  Balanced, easy going, and shy on sharp/hard edges, this brooder is a more crown friendly version Junior to its 4x priced Vintage brethren.

NV Churchill's 10 Year Tawny Port $30
After benefiting from some time to let the heat blow off, this Port is nuttier than Paula Abdul after a three martini lunch. Strong on the toasted almonds and smooth as a baby's behind, it forgoes fruity umph for overpowering nuttiness. On the finish it nods east to its sherry cousins. Complex and lingering, this will bring joy to the nut lover and satisfaction to the casual port drinker.

NV V. Sattui Madeira California $43
Once you get past the chunky wax seal on the squat bottle, there's no escaping it: this wine is brown.  Not brownish, but watered-down coffee brown.  That's Madeira for you.  Clean on the nose and complex on the palate, this is a wine geek's drink.  Caramel, toffee, tannins, hazelnuts, ripe fruit, dry raisins, and a bit of heat make this hard not to notice.  Thought-provoking and uncommon.  Best enjoyed fireside in the company of your favorite four-legged friend - or undisturbed contentment.  Best know what you're getting into with Madeira before making this splurge.

2009 Pellegrino Passito di Pantelleria $28
One whif of this unusual Sicilian elixir is enough to take you back to a simpler time and place where family get-togethers meant hours of playing outside with cousins, chasing, shrieking, and laughing.  The strong honeysuckle aromatics dance and dodge like sunlight filtering through tall branches.  Surprisingly balanced and absent of cloying sugars, this sweet return to innocence is a real treat.  Don't let the price tag deter you - a bottle will last you  several trips down memory lane.

2008 Pellegrino Moscato di Pantelleria $28
Thinkk Sauternes, but more relaxed and laid back.  Superlight in color, but full-bodied and viscous.  This Moscato is crying out for the crunch of almond biscotti.  Casual, light-hearted and anything but challenging, La Dolce Far Niente comes to mind with this in hand.

NV Warre's King's Tawny $17
Tawny Port should be your go-to house dessert wine.  Universally likeable, easy to make well and produce at a reasonable cost, it is the working horse of Port.  Ranging from common to corrupting, there's something for everyone in Tawny Port.  The King's Port falls someplace closer to common than its name aspires, but serves the purpose nonetheless.  It doesn't put Port's best foot forward, but will warm .