on February 18, 2011
A Well Executed Exploitation Of The Best Possible Conditions

Brian Graham was knee deep in blending when he quickly deflected a compliment on the 2006 Canard Cabernet.  "Thanks, but wait until you taste the 07 - it's 200% better.  Seriously."  As the guy who made both wines, he should know. 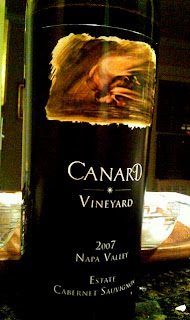 So, here we are, more than a year after making a strong recommendation for the '06 and the 2007 is on the shelves at retailers smart enough to have grabbed some.  After tasting draining a bottle in one long, enjoyable sitting, we now know that...

While Rich and Candi Czapleski, owners of Canard, purchased the home and 22 acre vineyard in 1983 as a weekend getaway, little did they know that the history of the Reason P. Tucker vineyard dates back to the 1860s.  For years they owned the property without realizing what a gold mine they were sitting on.  In fact, at first they didn't even realize that they could sell the grapes which made their way into Ravenswood and Mondavi wines for years.

Fast forward to 2006.  The Czapleskis team up with winemaker Brian Graham to produce their first Estate release.  With the success of their second release behind them, you've got to believe they're wondering why they didn't do this sooner.

This dynamite wine is a well executed exploitation of the best possible conditions - and then some.  Medium to full bodied density, but massive in its structure, the Cab's largess comes in waves.  Irresistible, full throttle, racy aromatics assault the senses.  Patient drinkers will linger over the nose, but the rest of us will leap ahead where the obvious Rutherford-esque tannins, crushed velvet texture, and infatuating complexity await.  There is nothing restrained about this serious, yet head-shakingly approachable wine.  It manages a balancing act; commanding of respect and humble in a got-nothing-to-prove way, elegant and big, and true to varietal and appellation while not being lost in the shuffle of homogeneity.  This wine's got real personality and character, and you'd be hard pressed to find one of its victims not gripping their glass tightly.

At under $30, the Czapleskis are setting a QPR benchmark that will keep their neighbors on their toes - and their customers re-ordering.  Another risk-free endeavor that's worth every penny.