Three Reds You Should Be Drinking Right Now

on March 28, 2011
It's hard keeping up with all the new wines being released this time of year - but it sure is fun trying!  Here are three reds that would've otherwise gone unnoticed had they not been (generously) forced upon me.  Miss enjoying them at your own peril: 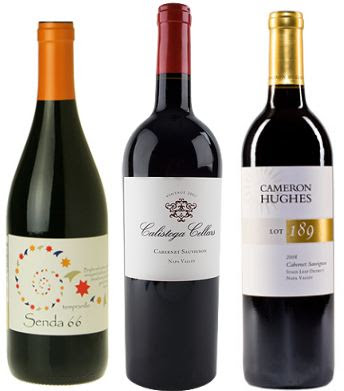 2008 Bodegas La Candelaria Senda 66 Tempranillo $9
Think Australia invaded central Spain and dumped a bunch of Rutherford dirt in La Mancha.  This sizzling bargain is chewy, dense, and deep-flavored.  A mouthful of dusty texture finishes it off for fun, hearty drinking.  From the region of La Mancha southeast of Madrid, where the warmer temps yield a jammier wine than the Tempranillo from Rioja.  Helluva wine for nine bones.

2008 Cameron Hughes Lot 189 Stags Leap Cabernet $22
At the risk of sounding like a broken record, CHW does Cabernet well.  In contrast to many of the lots released last year (which are still too young to enjoy), this upscale bargain is accessible right now.  Soft, luxurious, and giving, this lovely, medium-density wine will make you swoon.  Though it certainly doesn't need it, several hours in the decanter will reward your patience.  It's silly how universally appealing this wine is.  Bravo.
Calistoga Cellars Cabernet Cameron Hughes Lot 189 Stags Leap Senda 66 Tempranillo