The Worst Wine Ever

on June 08, 2011
As if to dare me to come up with something better, Tom over at Louisville Juice called my review of the 2001 Lanciola Terrricci The Most Enthusiastic Wine Review Ever.  I guess I had that coming. 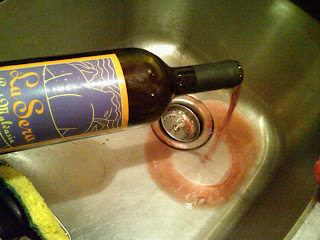 Not one to idly stand by at such a superlative, I give you the antidote: 2009 La Sera Red Malvasia...
In the glass, this Grimace colored wine is murky and opaque, with suspicious-looking surface foam.  Aromatics conjure memories of summer camp the year you discovered wedgies: Welch's grape juice and torn jockeys.  The attack is a sucker punch of bold, face-scowling sugar followed by a syrupy mid-palate of that loiters more than lingers.  The stalking finish is cloaked in buyer's remorse.  Weighing in at 5.5% ABV, one wonders if fermentation was interrupted just to cut their losses.
Anger clouds the mind while reflecting on this wine.  Your sainted mother is not even immune from the profane rants this wine induces.  While some wines haunt you for weeks with their character and intrigue, this one just haunts your large intestine.  You might just start smoking again after this wine, if only to suffocate the aftertaste.  I didn't, but I did walk over and kick the neighbor's dog.  A real asshole of a wine.