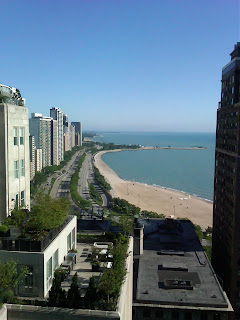 Three days in the Windy City should be enough to convince anyone that this is one of the world's great culinary meccas.  From hearty deep dish pizza to molecular gastronomy and everything in between, Chicago rocks.  Turns out the drinking scene is equally fantastic.

A foodie community that dates back to the industrial era is at least partially responsible for a wine legacy that benefits this town in many ways.  This is evident is the dozens of casual spots with long and accessible wine lists like Quartino, Bin 36, and plenty of others.  And the depth of wine variety runs, well, deep, at more storied spots like Spiaggia and the dozens of steakhouses this town has become known for.

But craft beer is huge here, too.  People here (and elsewhere) are in to it the way a lot of people are in to wine.  This is perhaps best exemplified at The Publican, which, in a casual and understated way, raises beer to an exalted status.  In what was a highlight dining event, our server (all at The Publican are Certified Beer Servers in the Cicerone program) paired insanely delicious oysters with Zephyr, a collaborative effort between local restauranteurs and Lagunitas Brewing Company.  YUM.

The grazing tour unearthed some other suprises, both good and not so good.  On the good side was one well-known and another not so well known nosh stop.  Blackbird, despite its minimalist dining room, proved warmly gratifying experience thanks in large part to standard-setting service and brilliant wine selections.  Food here is thoughtfully composed, if a bit overengineered.  Mercat a la Planxa, was a lovely surprise. Even the garish decor, arena-like dining room, and dreaded hotel location aren't enough to keep the Catalan-inspired small plates from shining here.  Very authentic and well executed.


On the flip side, The Gage, previously an oft-recommended favorite, seems to have faded.  Even the best food can't survive self-important, clubby bar service, but then even the dishes seem to be suffering from muddled and watered-down identities.  Bummer.  Finally, the widely hyped Girl &; The Goat was a tremendous disappointment.  While the service was terrifically attentive, the BTG wine list was unforgivable: mediocre, pedestrian, and overpriced.  But the low point was the retort from the kitchen after sending back a calamari dish that had fallen victim to a salt spill: "The chef would like to invite you to select a different dish."

So, we had a couple of missteps, but all in all, you can't go too wrong in this town when it comes to eating and drinking.
Cheers!
bin 36 blackbird chicago girl and the goat quartino the publican