on December 05, 2011
There was a time when California Zin was the unruly and rebellious rough-houser on the fringes of the wine scene.  Words like massive, ballsy, and powerhouse were synonymous with this grape.  As it gained followers, it also gained a degree of legitimacy and polish thanks to seriousness in the vineyard and winery.  This only amplified the wine's greatness. 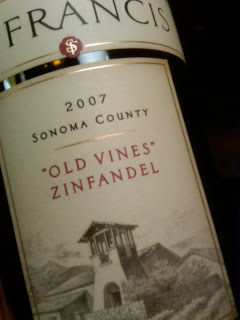 Ridge's Zin-based Geyserville from 1994 was my personal wine epiphany and the 1993 St. Francis' Sonoma Zin still ranks in my top 5 of all time.  Joel Peterson (of Ravenswood) was a hero to a burgeoning new cult and its purple-toothed enthusiasts helped catapult Zinfandel to popular notoriety.  Backwater farming regions like Dry Creek Valley began gaining traction thanks to Zin.  And back then, you'd be hard-pressed to find a Zin priced at over $20.  Those were great times to be a wine drinker...

Today, Zinfandel - including all of the above-referenced cornerstones of the zinstitution - seems to suffer from the same maladies as the kid who finds herself suddenly popular in high school.  Instead of remaining true to what everyone loved her for, she blends into the crowd around her.  At a fundamental and organic level, the irony is that the older vines get, the more intense the flavors get. So, WTF has happened?

(Disclosure: this wine was received as a press sample.)

This wine, the latest in a long line of neutered examples, confirms it.  As much as it pains me to say, the 2007 St. Francis Zinfandel Old Vines is to Zin what a Honda Accord is to cars; reliable, predictable, and completely lacking in surprise.  There's nothing wrong with that, but not only is it a shadow of its prior self, it signifies complacency, homogeneity, and boredom.

One thing St Francis has remained true to is being unafraid of alcohol.  At 15.5% (+?), she is one wacky loon stuffed into a cocktail dress.  It's too bad that alcohol alone does not make a good wine - because if it did, this crazy bitch would be incredible.

If Zin is on your mind and a Honda Accord suits you just fine, grab a bottle of this perfectly fine juice ($17-ish).  Me?  Call me old fashioned, but I'm still looking for that M5 of a beastly Zin  that scares and thrills at the same time.