The (Faded) Legend Of Muga

on December 09, 2011
People who aren't seeking out the occasional Rioja as part of their wine drinking routine are really missing out.  Tempranillo, the base of all red Rioja, can some in as many shades as a chameleon - ranging from slight and graceful to huge and extracted.  But classic Rioja has an appeal all its own that straddles old world and new, with enough acid to keep it refreshing and food-friendly, and enough oak and heft to please the modernity-inclined palate.

At the top of Rioja's long list of reliable wineries sits a handful of legendary producers.  And perhaps among the most recognized of those is the legendary Muga.  For some, merely the mention of the name stops and redirects conversations.  And going back to the 90's I can recall enjoying some spectacular examples from this cornerstone producer. 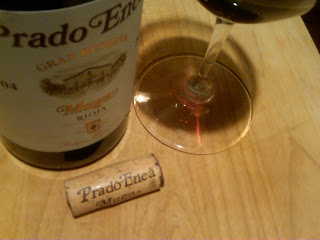 For years Muga has enjoyed immense popularity here in the US, so when a selection of their wines arrived for tasting, I was pretty excited.  But I've got to be honest: these were disappointing.
Rather than the classic structure and profile I expected - especially from these older vintages - the wines were categorically (save the Prado Enea) closed, withdrawn, and brutish.  Do they need more time?  Perhaps, but they all were decanted for hours and tasted along the way.  And the hard tannic component may never soften enough to let whatever fruit these wines are hiding sing.
On reflection to previous vintages, one wonders if these wines haven't suffered the heavy hand of Parkerization - and the pricing impact of Spain's success in the US market.
(Disclosure: These wines were received as press samples.)  Note: Prices were not included with the shipment, so those below are from a large, east coast wine retailer.
2010 Muga Blanco $16
Fresh and crisp with bracing acidity that gingerly walks away from biting towards its seafood pasta-friendly body. Quintessential summer in a bottle.

2004 Muga Prado Enea Gran Reserva $55
For the first couple of hours it seemed past its peak, fruit falling away leaving a heavily-wooded and tannic frame.  Off balance.  After 3+ hours, it unwinds, evolving and revealing as Barolo does, though never reaching real heights.  Its early brackishness gives way to something approaching, though not achieving, graciousness.

2007 Muga Reserva Unfiltered $26
Lean and taut on opening, though the density unwinds after a few hours revealing an unbecoming tarry flavor.  Clearly needs more time in bottle to resolve its inner turmoil.

2004 Muga Reserva Seleccion Especial $37
Deep, dark, dense-looking.  Smells that way, too, plus tightness wrapped in gobs of hard oak.  Three hours decanted only provides a start at softening this tannic beast.  Still very young, but is there enough fruit in here to survive these acids long enough to become approachable?  Likable, but darn pricey.

2005 Muga Torre $65
Almost black in the glass.  Exciting nose hinting at its massive structure.  Also in dire need of breathing time.  A refined, but barely restrained brick wall of a wine.  Easy to respect, but difficult to warm up to.  Like the Seleccion, its tightness keeps it from having enough headroom to express itself completely, even if its edges are a bit softer.  I'd like to try this again in another 10 years or so.  Really expensive. 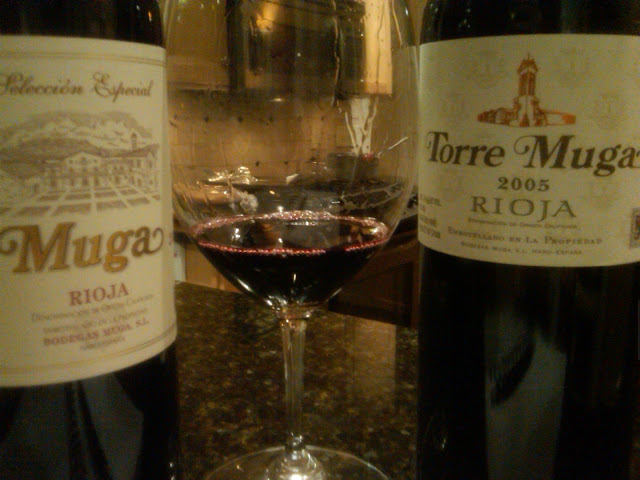