on February 10, 2012
Look, I know that there's a trend toward pairing wine with everything from NASCAR races to jelly beans.  Overreaching PR reps, no doubt bored out of their minds, mount carpet bombing email campaigns in the lead up to all the big calendar events: Christmas, Valentines Day, even Martin Luther King day (Quick! What wines pair best with remembrance?).  So, it's no surprise that there is now as much promotion of Shiraz on the hype-paved media road to the Superbowl as there is talk of Newt Gingrich's next inevitable gaffe.

But, come on.  Do we really have to contrive silly pairings in order to have an excuse to drink wine when we want to?  And does wine really go with primary debates?  (Personally, I need something much stronger - like strychnine.)  Still, it often beats the alternative.  Take Sunday's big game for example.

Drinking crappy light beer while cheering modern day gladiators is a tradition as American as betting on halftime wardrobe malfunctions.  Call me a communist, but I prefer a hearty, full-bodied red with my halftime wagering.  Feeling rather exuberant about my prospects, I opened two; neither of which are domestic, but either could take home the MVP trophy. 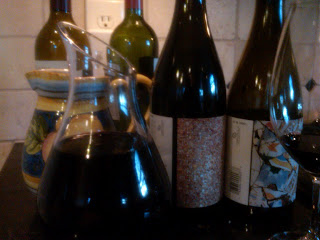 Alto Moncayo is a bodega in Campo de Borja, Spain.  The flagship bottling has long been a highly regarded favorite in these parts and is a world class wine of incredible dimensions.  Though at $50, it's a special occasion only wine.  Its little brother from the same bodega, Veraton, is made in the same style, but is a tad less testosterone-infused.  At $36, it is slightly more approachable to the wallet.  Both of these wines are huge, dense, massive linebacker wines and offer an obviousness that is inescapable.  Turns out they also offer an equally inescapable 15.5% alcohol.

So, as half time wound down and the bets were settled, these delicious monsters blitzed out of the locker room with lightning speed and devastating power.  Only just now recovering, I couldn't tell you who won the game, but I can tell you who took home the MHO trophy on Monday.

Perhaps there is some intelligence behind that American tradition after all.  Congratulations to the winning team and their many happy fans.
alto moncayo