The words came as a surprise, plain as they were and from the mouth of Mark Manzoni.  A soft spoken third generation grower, Mark is a partner at Manzoni Vineyards in the Santa Lucia Highlands.  Until that point in the conversation, he had been the quietest of the winemakers/growers at the table.  But when talk turned to which variety they'd like to see succeed the most in the SLH, Mark shrugged off the shy guy routine and spoke his mind. 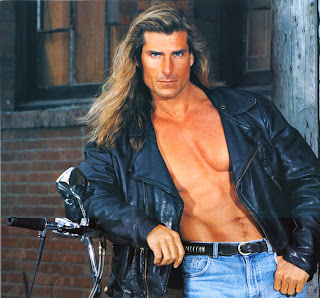 "We get 4-5 tons an acre, easily. More if we don't prune it back aggressively...I'd kill to get that from Pinot."

And so began a lesson in the virtues - and heartbreak - of this grape.  Though the SLH is firmly Chardonnay and Pinot Noir country, it was clear these guys really like what Syrah can do.  Dave Fleming and Jennifer Murphy-Smith of Paraiso, Richard Jensen from Ventana, and Dennis Kuchta of Sycamore Cellars all agreed that Syrah is an incredibly dependable grape in the vineyard - and often superior grape in the bottle.

Other superlatives were thrown around, too:
Studly, for sure.  But heartbreak follows - in the next installment.

Okay, homework recap...in Part 1 you guzzled an Australian Shiraz and for Part 2 you quaffed a French Syrah.  The Rugby Player is quite different from his French cousin, no?  Chances are you found the Rhone example to lack the chocolatey fruit and liveliness the Ozzy bottle was jumping with.  But you probably also found the French Syrah to have a bit of a savory structure, some food-friendliness, and a refinement the Rugby Player simply can't carry off.  This is no surprise.  Other qualities common in French Syrah are an earthy, leathery flavor that comes across as rustic.  It's not quite as obvious a wine, but these attributes are singularly French.  So, we'll call this Syrah personality Napoleon.

Same grape, different hemispheres.  Hard to believe it's the same grape, isn't it?

Homework is strictly for bonus points this week.  Reach for a California Syrah.  At the lower end of the price spectrum you're likely to find Syrah grown in warmer climates, though all will be labeled simply as "California".  This is what we're looking for as they will provide yet another contrasting data point.  Some specific names to look for:

The objective here isn't to be wowed by the wine (because I doubt you will be), but to get a baseline on mass produced Syrah.  Happy drinking!
manzoni paraiso sycamore syrah ventana