on March 26, 2012
Pierce Ranch Vineyards is a different sort of winery.  They're situated in southern Monterey county, way down in the San Antonio Valley AVA.  It's so far south, it's closer to Paso Robles than it is to the Santa Lucia Highlands.  But aside from the location, what they grow is, well, out of the ordinary.  For these parts anyway.

My introduction to Pierce came by way of Ian Brand, winemaker for Pierce, de Tierra, Coastview, Fieldfare, Petit Payson, and who knows how many others.  During a long, intense tasting session (see photo below) at Wrath, whose facilities Ian uses, he dropped the Pierce name.  Then he dropped a mixed case of Pierce wines in my trunk to try.  And now I know why he had that smirk on his face. 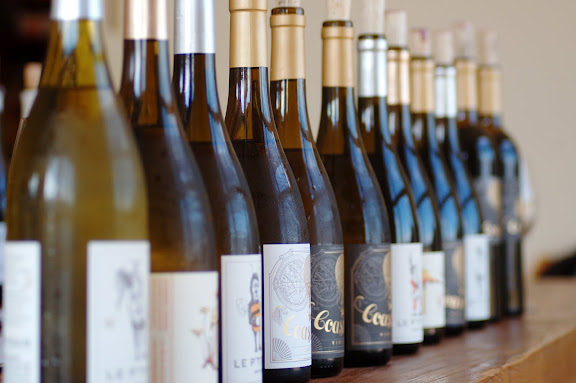 You see, Pierce specializes in Spanish and Portuguese varieties.  Yes, they bottle Tempranillo, Touriga, Graciano, and a bevy of blends that would make your head spin.  And, yes, they grow them in southern Monterey county.  Collectively, these wines are an odd bunch.  And that's not even doing them justice.  They're quirky, whimsical, and sometimes down right strange.  But there's a bravery to this irreverent approach that's admirable.  And where guts and talent meet, something pretty terrific usually happens.

Pierce's shining, brilliant example of this: the Albariño Sur Lie. 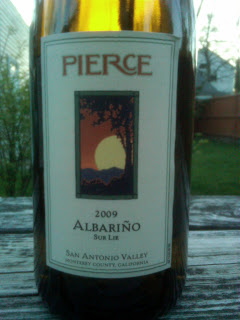 After tasting through a lineup that included a confused Tempranillo, Touriga, Graciano, and Petite Sirah (named Cosecheiro) and a jazzy GSP (Grenache, Syrah, and Petite Sirah), the Albariño Sur Lie was not only unexpected, but mind-blowing.  A flood of flattering descriptors come to mind, even months after enjoying it: focused, crisp, layered, complex....light body, full flavor, dry finish...it amazingly honors the identity of Albariño without patronizing the stereotypical fruit bomb that Spain often imports under the same name.

Regrettably, the Sur Lie is made in minute quantities, but there is a regular Albariño available from Pierce, too.  While not the experience the Sur Lie is, it's still a faithful rendition of the grape made in a distinctly European style.

The adventuresome drinker will do well to keep an eye out for this label - and the smart shopper will track down some of the Albariño Sur Lie.
Albariño Sur Lie california monterey pierce