on April 03, 2012
Once upon a time in a not so far away place called California, there was a grape named Zinfandel.  He was an animal: gnarly and irreverent.  Zin was brought over to Cali in the 1800's by Italian immigrants and planted in fields with friends like Alicante, Carignan, and Petite Sirah.

It was a regular party out there and Zin was the swaggering ringleader.  Those were the days.

In the heyday of modern vineyard management, Zin was genotyped along with his field brethren.  Isolated from the other fruit, he was discovered to be a dude with serious potential.  This potential was cultivated and treated seriously, both in the vineyard and the cellar, too.  And as time went on, bottled Zinfandel grew a pair of incredibly huge, hairy ones.  Terms like "monster" and "brick house" were thrown around in the most affectionate of ways.  The variety was treated with discipline, which helped extract polish and refinement, but no amount of which could suppress his wild ways. 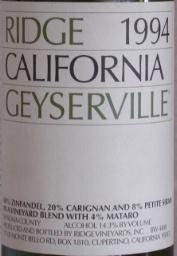 All those factors (and others) converged into a perfect viticultural storm.  Those were the days, indeed.

Geeks who were close to this movement in the 80s talk about this time like it was Woodstock.  To read the descriptions of the Zin being made back then, you'd think it was all hippies and pot and chemical experimentation in the cellar lab.  Maybe it was.  But the spirit of Zin the Bad Ass was still alive in the early 90s, too.  Ridge's '94 Geyserville, the faous Zin-based blend and the wine that turned a beverage into an obsession, was born in this spirit. The '93 St. Francis, too, remains a touchstone wine for me; unorthodox structure, insanely (for then) high alcohol, and unquestionably irresistible.  Though you had to really seek it out, Zinfandel back then was nothing short of outstanding.

I tasted a Zin last year that transported me back to that time.  It was the Peterson Bradford Mountain, which I happened upon in a tiny shop in Bedford Hills, NY.  The memories of a different time and place came flooding back.  I was overwhelmed and haunted at the same time.  I reached out to Jamie Peterson who told me that the vineyard had been yanked and replanted a few years ago.  What I had had was the last of it.

I found myself clutching at ghosts.  And I still am.

This era could very well be the greatest time to be a wine consumer since Roman times.  Information, access, and insight are keystrokes away.  Diversity is a word that perhaps best characterizes the style of the new millennium - and we are damned fortunate for it.  But for all the natural wines and freaky production methods and unheard of grapes we can acquire and drink, I'd really, really love to see Zin's heritage honored today in a huge, hairy, monstruous way.
dry creek other peterson ridge zinfandel