Where California Chardonnay Comes From

I've had their line up of Chardonnays before, so revisiting them in this vintage was informative. 2010 was a rough year for a lot of California, but you'd be hard pressed to find evidence of that in these wines.  Of all I tasted - as with the same lineup last year - what impressed the most were the lower priced offerings.  Specifically, the reliable and bombastic Riva Ranch.  It epitomizes the big, bad Chardonnay profile California became famous for.  If you like that kind of wine, this is one you just can't miss with. 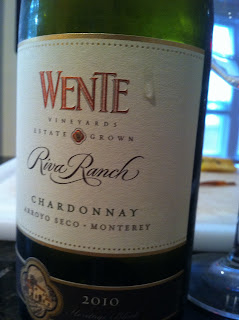 2010 Wente Chardonnay Arroyo Seco 'Riva Ranch' $20
How is it?  Same as last year.  And the year before.  And the year before that: Swaggering and solid.  All the stereotypical CaliChard flavors are here - creamy, buttery, plump fruit - and in ample volume.  But they're also in balance, even if a bit fleshy - a feat considering the generosity of fruit this wine delivers.  A guilty pleasure for sure. SRP is $20, but you'll likely find it for around $14 or so.