Come Hither: The Beauty of Appassimento

on August 25, 2012
The process of appassimiento is the centuries old method of drying late-harvested grapes on straw mats for four months.  These partially dehydrated grapes are then pressed for their concentrated juice to make wines called passitos.  Though drying grapes as a means of concentrating flavors is not unique to our Italian cousins, understandably, appassimiento typically does not yield dry wines. It typically yields syrupy sweet juice for dessert wines.  Typically.

The region of Valpolicella (say VAL-poh-LEE-chellah) sits midway between Milan and Venice, and it's here that the process of appassimiento is used to make Amarone.  Those familiar with Amarone can skip the next few lines as you likely need no selling on this wonder of a wine.  However, for the uninitiated, Amarone is, well, a wonder.  Rather than producing a sweet wine from the dried mostly Corvina and Rondinella grapes, the pressed juice is fermented dry.  This takes time and, not surprisingly, yields a powerful wine.  But if you're thinking of a dense, heavy, fruit bomb of a beast, you'd only be partially right.  Amarone is so much more.

For one, it's not cloying or sweet.  Its acids are present as they are in all Italian wines, but subtle and well integrated.  It is commanding of attention thanks to its inky darkness, come hither aromatics, and dizzying layers of flavors.  In all, it is a package rife with seduction.

A a practical level, because of the time, lower yield, and risks associated with producing Amarone, entry level is around $30 a bottle here in the US.  And most better wine shops will only have two or three options since it is made/exported in limited quantities.  Still, there are few other experiences that offer such eye-popping affirmation.  Franklin was right, God does indeed love us. 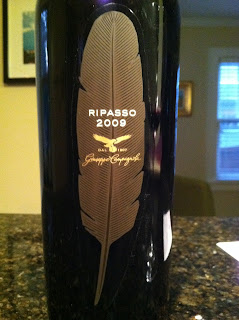 But Amarone is not where the fun stops.  Cultures that long ago learned to make do with little are experts in finding value in what would otherwise be discarded.  And so it goes with the pommace, the stuff that's leftover after the Amarone grapes are pressed.  This stuff, dark, tannic, and full of bits, is then used to make ripasso wines.  Ripassos are, literally, wines which are "passed through" that stuff.

So, when the regular Valpolicella wine is being made, they throw the Amarone pommace into the batch to make it Valpolicella Ripasso.  By the time all those bits are strained out, they will have contributed color, body, backbone, and a dose of Amarone flavor to the otherwise straightforward wine.  By no means are Ripassos the beasts that Amarones are, but the ripasso process make these wines into something special.

Because a little goes a long way, Ripassos are far more common (and less expensive) than Amarones.  You should find a handful of options at better wine shops mostly in the $15-20 range.  I wrote about one standout a couple of months ago from Masi, the winemaker largely credited for popularizing the ripasso process.

Another polished Ripasso representing a tremendous value is from Giuseppe Campagnola, the 2009 Ripasso della Valpolicella ($15).  Coincidentally, I was fortunate enough to come across a bottle of his 2007 Amarone della Valpolicella Classico  ($33).  Magic?  Yes, magic.  Both of these wines are terrific examples worth seeking out. 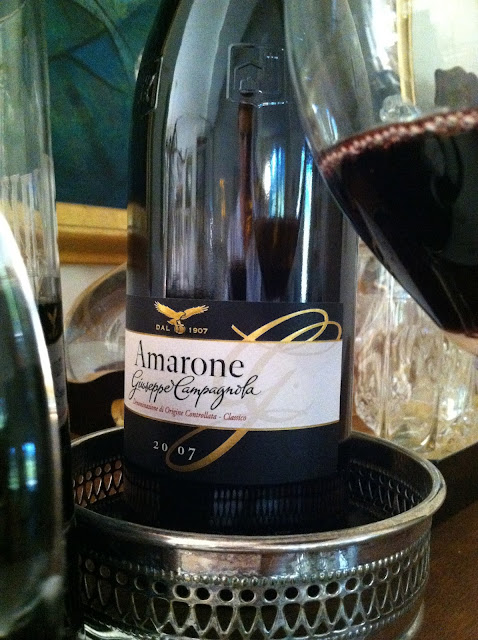