Wine In A Box

on August 28, 2012
Say what you will purists, but this is the future of mainstream wine.  In fact, it's the present. 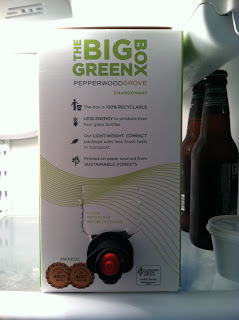 After reviewing this wine a couple of years ago, a bunch of other box wines showed up for review.  If you don't remember reading those reviews, it's because they weren't worth it.  But this?  This is a bit of an enigma, the Big Green Box.

The wine, which is non-vintage and, according to Don & Sons' PR folks, is made when demand demands,  hasn't changed since two years ago.  Sure, it's heavy handed with the caramel and glycerine and faux oak, but it's more than chokable at a barely chokable price.

Once again, the waters were tested and this was served out of an unlabeled bottle to unsuspecting BBQ guests.  No one questioned its provenance or even remarked on it.  Moreover, if empirical evidence counts for anything, a liter and a half of it was gone before dinner.

Given the incredible efficiency this packaging represents, you've got to believe that more and more - and better - wines will be delivered this way.  Maybe not Chateau Haut Brion and maybe not tomorrow, but these boxes are going to be more visible next year than this (as there were this year from last).