A Pair Of Rare Italians

on October 22, 2012
It's not often that Italian wine makes its way into the Winethropology sample pool.  And that's too bad, because, as regular readers will recall, there's a lot to love about Italian wine right now:  Truth, value, and real drinking pleasure.

These two are from different producers and regions, and share little in common other than they are terrific values worth being on the lookout for. (Full disclosure: these wines were received as press samples.) 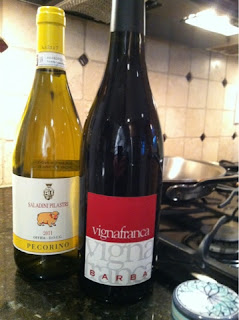 2010 Fratelli Barba Montepulciano d'Abbruzzo Vignafranca $16
Viscous and inky, this could easily be mistaken for Petite Sirah, but the intensely perfumed aromatics suggest southern France.  The triple take comes from the firm acids and structure, which bring you home: quintessential Italy.  Not your father's simple Montepulciano, this complex beast is closed and obtuse on approach, but a couple of hours of air and a meal bring song to the palate.  A lot going on here for the money.

2011 Saladini Pilastri Pecorino Offida $12
The Pecorino's most prominent quality is a slightly nutty funk found in many aged whites on the other side of their drinking peak, though that's very unlikely the case for a wine harvested just a year ago.  Still, as unusual as "funk" sounds, it is an inexplicable draw.  Even with four other whites open for evaluation, this wine possessed a gravity that suggests its appeal lies in a place this writer cannot access - except with his taste buds. I will be seeking this out again.
montepulciano