on December 17, 2012
To say that this is the end of the LoCa series would be misleading.  Instead, hopefully it is a spring board for discovery for any readers who value a good bargain, some out-of-the-ordinary blends, and unique character.  The informed consumer will keep their eyes peeled for wines from Lodi, as improvements in vineyard management, vinification, and low prices combine to strike an increasingly attractive pose.  Though Old Vine Zinfandel is perhaps the best known from these parts, there are some notable wines which deserve respect and attention - and the likes of which you'll not find elsewhere in California.

We wrap the LoCa sequence with a few from Borra Vineyards, pioneers in the Lodi region.  But before we get to those wines, two other, specific wines you should absolutely seek out without delay: Klinker Brick's Farrah's Syrah and Uvaggio's Vermentino.  Both are wines of obvious appeal and terrific value and deserve a place on your dinner table or cellar shelf before they are no longer available. 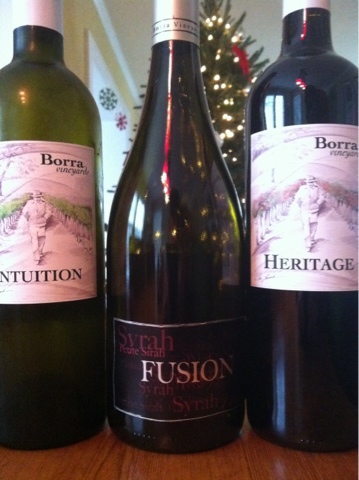 Don't let the Kinko's-like packaging fool you on this one.  It's got a nose like a complex and expensive French Chardonnay, and the sensation carries through to the palate, surprising with layers of fleet-footed nuance, persistent traction, and a long, full follow-through.  The mid-palate is lighter than the attack suggests, but the lull is welcome given all this thought-provoking wine has going on.  The finish has the same distinctive nutty aftertaste as aged Chardonnay, but somehow manages to remain magnetic.  Yowza.  Kerner, Gewertztraminer, and Rieslaner.

2011 Borra Vineyards Red Wine Lodi  "Fusion" $19
Though bordering on trendy with its extroverted fruit, there's something for everyone in this compelling blend.  Dark, brooding, dust, rich, and potent, it's a spicy, mouth-coating beast.  Companionable with hearty fare, its vigor commands attention. Syrah dominated with Petite Sirah and Zin for spice and grip.  Very respectable value.

2010 Borra Vineyards Field Blend Red Wine Lodi "Heritage" $25
Barbera lends an overt fleshiness to this that's offset by Petite Sirah and Alicante, so there's structure to this "modern" styled blend.  It initially has a subtle funk factor that's appealing for its character, but becomes less discernible as the dusty texture and proud fruit integrate and speak loudly.