SLV Taste Off: Can Cameron Hold Up?

on December 12, 2012
(We are taking a brief break from the LoCa series, but fret not, we will return with a few more wines and a wrap up next week.)
The question comes up a fair bit: "Are Cameron Hughes' wines that good?"  There's no easy answer to that question, what with such a variety of wines being purchased/made, escalating prices, and dozens of other variables.  But the opportunity came up recently to answer that question directly - at least in a narrow comparison.
Friends were coming for dinner and they offered to bring a bottle of CH Lot 189.  Fantastic.  Lot 189 is a 2008 Stags Leap Vineyard Cabernet whose praises have been sung on these pages before.  It's no longer available (it was released at the beginning of 2011), but the 2008s are drinking very well right now.  Wild mushroom risotto beckoned, too, so why not?
To make things interesting, a bottle of Pine Ridge Vineyards' 2008 Stags Leap Vineyard Cabernet (a sample) made its way into the mix for a head-to-head taste off.  This wine, too, has been showered with praise here before. 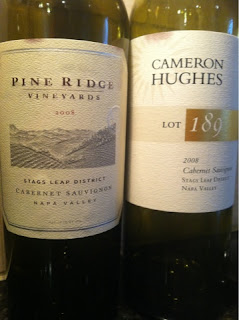 The first thing to note is that the Pine Ridge is nearly four times the price of the Cameron Hughes.  How can a wine a quarter of the price possibly stand up?  It's hardly fair!  Or is it?

Well, the good news is that both wines were superb.  (Quick side note: both wines enjoyed five-plus hours of decanting.) Both showed real Stags Leap character, structure, and voluptuous fruit.  At first taste they were almost too similar to tell apart.  But as the evening went on, the differences became more apparent.

The Cameron Hughes is slightly more approachable than the Pine Ridge, which is to say that it's more obvious in its delivery of appealing qualities.  Its flavors unfold easily and its excitement is immediately apparent.  In all, a terrific wine.  In contrast, the Pine Ridge is more elegant, sophisticated, and - at least on initial approach, coy.  There is a complexity in this wine needs some space to evolve, but when it does, there's no looking back.  Also a terrific wine.  But the Pine Ridge has a polish that sets it apart from its counterpart in an increasingly significant way.

If we were talking about strangers at a James Bond-ish cocktail party, Lot 189 would have perfectly styled hair, a chiseled body wrapped in form-fitting threads, and a come-hither smile.  The Pine Ridge, on the other hand, would be the more understated guest wearing uber-comfortable, but expensive clothing, fashionable glasses, and a glint suggestive of inner brilliance and passion.

But the most obvious difference between the two?  Price.  So, in the final analysis, which wine we'd choose depends on who's picking up the tab.  If it's my money, it'd be the Lot 189 every time.  But if it's someone else's expense account, the Pine Ridge is an obvious corkscrew target.
Cameron Hughes Lot 189 Stags Leap pine ridge stag's leap