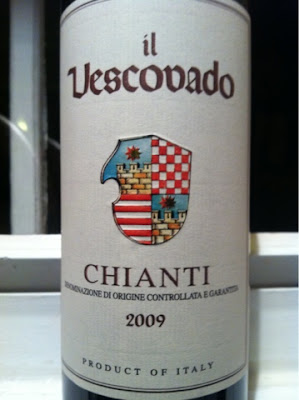 Prior to the 1990's, Chianti was synonymous with large, straw-wrapped bottles served at checkered table cloth pizza joints.  Volume at low cost was the objective and one it achieved handily.  But modernity in methods and equipment made its way to Tuscany and, as has happened with many other under-realized winemaking regions, Chianti became something respectable.  Today, it can be a challenge to put your hands on an enjoyable Chianti Classico for under $20.

Because of this notoriety, Chanti has fallen off the Winethropology drinking radar the last five or so years.  Prices have outpaced those of the ever-improving declassified blends of Tuscany and Umbria, but they aren't necessarily justified.  Still, this $9 curiosity ended up in the shopping cart in the run-up to the holidays and, finally, to the dinner table.

2009 il Vescovado Chianti $9
Light-to-medium bodied and gently perfumed, this gulper is a refreshing change of pace.  Low in alcohol (12%) and consequently very approachable, there's not a sharp edge to be found.  The red fruit core is, thankfully, not inhibited by cloying sweetness or harsh acids - it's just immediately accessible.  A well-rounded, versatile wine that is equally comfortable in the company of pizza, hearty country fare, or four year olds' birthday parties.  Endearing for its lack of complication and very attractive at the price, this is a bulk purchase recommendation.
chianti get il vescovado