on January 31, 2013
France and Italy take turns producing the most volume of wine every year.  But Spain has more land planted to wine vines than either of those countries.  Now you know.  No surprise if you look at a map of Spain's viticultural appellations.  Basically the entire country grows wine grapes.  From the crisp whites of Galicia in the cool northwest to the concentrated red from Jumilla in the sweltering south, the diversity of varieties and styles is incredible.  So are the values.  Here are two:

(Disclosure: these wines were received as press samples.) 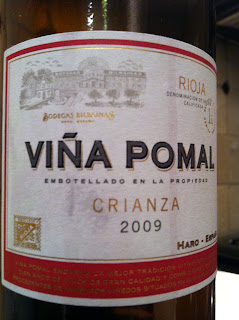 At cork's pull the American oak is prominent and as fresh as the lively fruit.  Some decanting lets the treatment blow off considerably.  What you're left with is a medium-weight, balanced, straightforward Tempranillo of the not-overly-extracted variety.  First impression brought back (happily) memories of the 1998 Sierra Cantabria, an $8 wonder of a wine that signaled a turning point for Rioja.

2010 Viña Zaco Rioja Crianza $12
Very much in contrast to past vintages of this wine when it's been fleshy and extracted, the 2010 borders on taut.  Angular in its structure with American oak upfront and medium-bodied old school fruit, another year or two in bottle ought to soften the approach and reveal an elegant balance.