on May 30, 2013
Rare is the chance encounter when purchase decision-making factors coincide in happy harmony. That might sound jaded, but the offerings of wine world are in constant flux and once you're able to zero in on a bottling that tickles all of your fancies (without simultaneously emptying the college fund) - poof! - it's either gone or, more likely priced beyond access. Still, lightning does strike and when it does, you know the tingle.

By pure happenstance I came across two bottlings from the same producer in two faraway cities within two weeks. The first, a Barbera, was more than a treat. Lithe and medium-bodied and in firm possession of abundant x-factor appeal, this $15 outperformer tickled indeed. The second, a Syrah, defies nearly every description I've attributed to Syrah. Sharing the same high-noted, vanilla-laced oak treatment and winemaker's thumbprint as the Barbera, this Syrah lures with infatuation.

I'm a huge believer in empirical evidence, most especially when it comes to wine. Want to know which wine is the winner in a crowd? Throw them all on a table at a gathering and see which one empties first. With that in mind, the empirical evidence regarding these Scott Harvey wines in overwhelming. These two are a pair of $16 winners. Good luck putting them down. 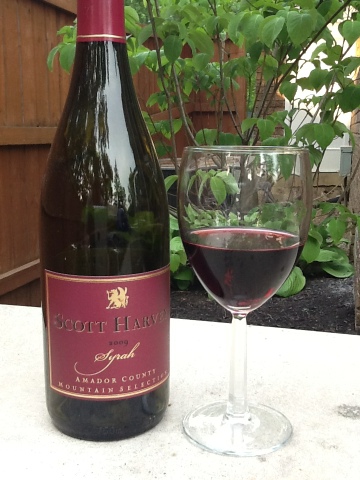