Picking up on where we left off on our last dispatch....as I had recently written about Santa Barbara County...

"...if Pinot Noir attracts much of the attention in this area, then Rhone varieties generate much of the passion - at least for those in the know.  Underappreciated and undervalued, less familiar varieties like Marsanne, Roussanne, Grenache Blanc, and Viognier make brilliant, complex whites that boggle the mind and dazzle the heart.  Similarly, less popular red varieties - Syrah, Mourvedre, Grenache - emulate the French traditions of the southern Rhone valley while maintaining an identity true to their provenance. Powerful, complex, and incredibly satisfying, red Rhone varieties in Santa Barbara County seem to thrive..."

This statement is perhaps best embodied at Tablas Creek Vineyard.  This sister outpost of Chateauneuf-du-Pape's Chateau Beaucastel focuses almost exclusively on Rhone varieties and a philosophy of "Minimizing human intervention to maximize the expression of our terroir." That's hardly a rare statement from winemakers these days, but it is rare to see it put into practice in such a real way. Though they prefer (smartly) to focus on the results in the bottle rather than vineyard practices, the good people at Tablas Creek are not shy about their organic and biodynamic farming.  Let's talk about what that means for a minute.  (Quick disclaimer: Biodynamics is something I know precious little about other than that it is hotly debated among a very small cross section of winemakers/growers and sommeliers with nearly the same fervor as denominations of Islam are.) 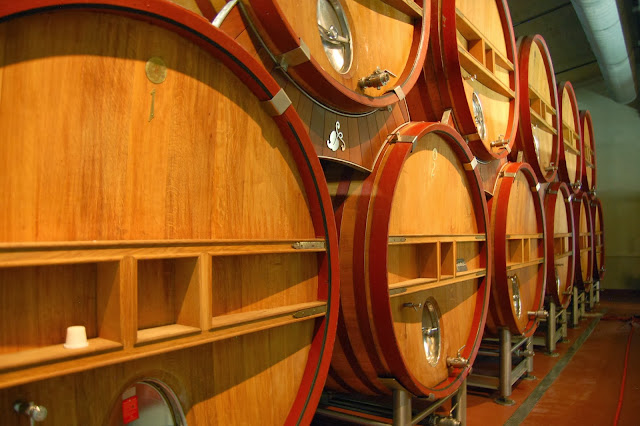 If we can agree that putting fewer pesticides on the products we consume, then organics are a good thing.  And while biodynamism principles overlap with organic practices, they are not the same thing - at all.  I get the idea that bio (as it's called in France) is focused on creating an ecosystem in the vineyard of reciprocating flora and fauna life cycles.  At Tablas Creek, chickens roam the vines eating 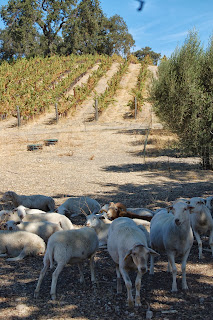 grubs which would otherwise endanger the vines or require pesticides to combat.  Cover crops are planted in between vines to leech nitrogen into the soil.  Sheep eat the cover crops, loud alpacas and donkeys scare predators away from the sheep, rams ram each other into unconsciousness in the vines (which also helps scare the mountain lions away), pigs - I'm not sure what the pigs do other than look cute - and Maddie, the winery dog, keeps visiting children safe and in good company.  All of these animals leave their trace helping to fertilize cover crops.  One big cycle.  Or interdependent cycles.  I'm not sure.  But what is not in dispute is the level of biological activity in the soil.  Under a microscope, conventionally farmed soil is dead whereas soil from biodynamic vineyards is literally crawling with life.

So, what if Tablas Creek is just one giraffe shy of being a zoo?  All of this is hooey unless the experience of consumption is at least equal to, if not improved over, that of conventionally grown products.  That's where truth tests theory.  If farming practices provide a superior platform from which the winemaker works, then terrific.  But things have to be done right both in the vineyard and in the cellar to produce quality wines.  Which brings us back to the winery.

We're not going to cover well-covered ground about Tablas Creek's winemaking methodologies here other than to reiterate that Tablas is focused on Rhone varieties.  And that they want you to taste the wine as it's grown in the vineyard, not as they could have been manipulated in the cellar.  I'll also preface my impressions of their wines with a note that my personal palate does not naturally gravitate towards this style of wine - a disclaimer which hopefully lends the following impressions greater weight.

Categorically, these wines are of uncommonly superior quality.  You can taste it.  There is an honesty with which they speak that is impossible to miss.  Clarity and focus are pervasive across the board in reds and whites alike.  This characteristic was so pronounced that I quickly became, well, a bit giddy.  To wit: midway through the tasting, General Manager Jason Haas stopped by to say hello, but by this point I was too stupefied and distracted by the wines (yes, I was spitting) to carry on any kind of substantive conversation.

Though they do bottle a handful of noteworthy limited production single varietal wines, Tablas has three main levels of wine: Paletin de Tablas (entry level), Cotes de Tablas, and the upper tier Esprit de Tablas.  Brief recollections some of what we tasted:

2011 Cotes de Tablas Blanc ($30) - Good God! Dizzying in its rapid fire attack of multi-faceted, complex white flower aromatics and full frontal assault of flavors that manage to be supple.  Irresistible and worth every penny all day long.
2011 Esprit de Tablas Blanc ($40) - Elegant and lovely.  Unhurriedly unfolds its flavors in a seductive display of allure.
2012 Vermentino ($27) - Faithful to the grape.  Bright, sprightly, and energetic.  Drier and leaner than most examples from its home base of Sardinia, which is a good thing in this case.
2011 Paletin de Tablas Red ($20) - Vibrant if monolithic.  Tastes more like a Beaujolais than a Cotes du Rhone. Hard to believe it's half Syrah.
2011 Cotes de Tablas Red ($30) - Pure.  Fruit core stares you down from the glass.  More captivating for its unwavering gaze than its intensity.
2010 Grenache ($40) - As compelling and transparent as any of the wines here.  Solid acidity frames this wine nicely and gives it a bit of grip.  Can't wait to uncork again in a few years.
2010 Esprit de Beaucastel ($55) - Venerable, proud, precise.  The last vintage bottled under this name (renamed to Esprit de Tablas starting in 2011). 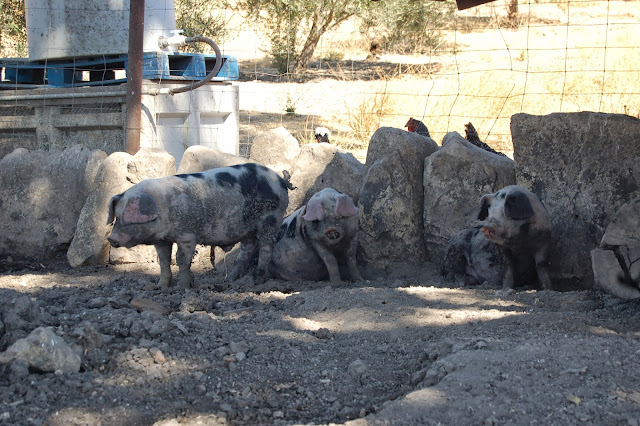 So, does biodynamic vineyard practices translate to irresistible wines?  Not as an absolute rule, but in conjunction with seasoned, skilled hands in the cellar, that certainly is this case here.  Be on the lookout for these wines and don't hesitate to scoop some up if you spot them - they're worth the experience.