A Welcome Exception To The Rule - Napa Reds

on November 03, 2013
Napa put California on the global wine map back in the 1970's.  And the contemporary wine industry owes much to Napa's pioneers and ongoing custodians for innovations in everything from marketing to vertical integration.  But as anyone who's been to Napa lately knows, there's more risk than reward for the common man in this valley anymore.  Twenty-five dollar (and higher) tasting fees, self-congratulatory proprietors, and traffic jams are too much of a turn off when the caliber of winemaking is so inconsistent and the audacity of pricing is so oblivious.

Thankfully, there are exceptions to this generalism.  Yes, tiny, dedicated projects continue to make the most of this exceptional soil.  Names like Canard, Boeschen, and Vincent Arroyo come to mind.  But unless you're dialed into an inside line, these boutique and semi-affordable producers of Napa reds are like face-value Superbowl tickets - elusive, if not out of reach.  For the rest of us, there are those brands which have achieved economies of scale - and distribution - without forsaking similar dedication.  William Hill is one of those. 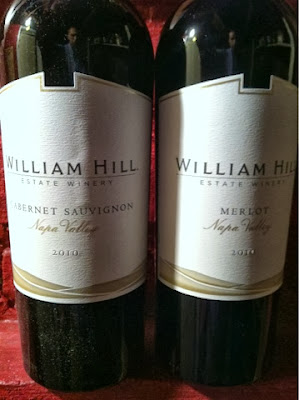 I've reviewed enough William Hill wines now to be comfortable with recommending the Napa bottlings without reservation (though I've had less luck with their Central Coast Cab).  Year in and year out, the wines produced under this label serve as earmarks for what higher-priced neighbors ought to be able to achieve, if not surpass, at their loftier price tags.  Below are impressions of three recent samples (all of which you're likely to find at lower prices than listed).

2010 William Hill Merlot Napa Valley $25
About as purely Merlot as you'll find anywhere - including France and Washington.  Laser beam-focused in its delivery of core fruit.  Delicately framed by a modest touch of oak and tannins making for complete balance and satisfaction.  Much of this wine's appeal is that, while plenty rich in flavor, it speaks its truth without clubbing you with intensity.  If you've forgone Merlot since Sideways, it is high time to stop denying yourself the pleasures of this underrated grape.  (Yes, Patty, I'm thinking of you.)

2010 William Hill Cabernet Napa Valley $34
I recently recommended William Hill as a reliable, lower-priced go-to brand for Napa Valley reds to a seasoned veteran of Napa's triple digit bottlings. And, while not quite the phenom the 2008 was, the 2010 Cabernet helps explain why this is an easy recommendation to make. Still just barely emerging into vinous adolescence, it requires some hours breathing before beginning to shake off its tight, closed tannins. But when it does, that dependable elegance, spot-on Napa Cab character, enticing acidity, and voluptuous baritone fruit come into focus. This wine has loveliness and real drinking pleasure in its future. 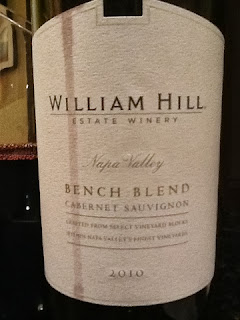 A limited production bottling from select benchland sites, what the Bench Blend lacks in current approachability it will make up for in long-lived elegance. Dark as a wicked soul and with racy aromatics that make the hair on the back of your neck stand on end.  The fruit is in here someplace deep in its core competing with the razzle-dazzle of precise acidity and a structure too young to reveal itself.  Salivary glands are wincing even after 3 hours decanted thanks to powerful, dry tannins. This is a difficult wine to stay away from despite what seems like too much oak treatment, but its clear that this wine, very much in its excited prepubescent phase, has a bright future ahead of it - it just needs a bit of time to come into its own. And when it does....whoa...you can taste the promise.