on November 10, 2013
Truchard has been growing a smattering of different varieties on its 400 acres in Carneros since its establishment in the early 70s - making them pioneers by comparison to most of its neighbors.  A family-owned affair, they've been making their own wines since the late 80s.  Though a familiar name with wide distribution, this round of samples was my first introduction to the brand.

Two standouts here worth drawing your focus to are the Roussanne and the Syrah, both of which fare well in the cool Carneros climate.  Roussanne is a variety which deserves more attention as it is less common here in the US than in France or Australia, but has the capacity to outshine many more popular white varieties.  And the Syrah is perhaps one of the more interesting (and pleasurable) I've had the pleasure of drinking from Napa Valley.

(In order of recommendation.) 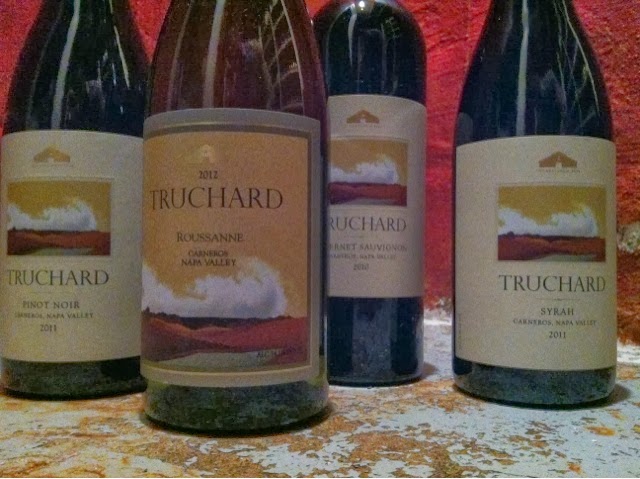 2012 Truchard Roussanne Carneros $25
Every bit as compelling as well-made Chardonnay, that Roussane remains under the radar to 98% of consumers means more accessibility for those in the know. As this example proves, this Northern Rhone white variety has the depth, character, and potential for seriousness which make it worthy of your attention. And thanks to its California provenance, Truchard's Roussanne possesses all the funk of its French cousins plus a strong, forward presence that makes it even more broadly appealing. Delicious and thought-provoking.  I've been thinking about this wine since.

2011 Truchard Syrah Carneros $30
Needs a little time for the hot, fast aromatics from its 14.3% ABV to blow off, but once it does, there's a solid - impressive, even, Syrah. Squarely in the savory camp (all kinds of interesting flavors are hinted at here: sinew, olive, bacon, scorched earth, tar) but this wine hasn't forgotten that grapes are fruit, either. Flavors unfold in waves of dimension along the dark, long finish making for quite a satisfying - and cerebral - experience.

2011 Truchard Pinot Noir Carneros $33
Textbook Carneros Pinot, though a tad more tandem weight than the norm - no doubt a result of the year. Has all the key elements: round, creamy fruit framed by slightly spicy acidity. Yum. Given this example - a worthy wine on its own - I'll look forward to the 2012 with great anticipation.

2010 Truchard Cabernet Carneros $38
Not your typical Napa Cabernet at all.  This wine's got three strikes against it before the cork's even out- late rains at harvest, Carneros isn't exactly Cab country, and it's north of $30.  Still, this timid version of Napa Valley Cabernet tries to endear with its coy demeanor.  Softer and lacking in Napa Cab's trademark intensity.  Green high tones spice this light-bodied red in a decidedly South American style.  Though subtle, there's a jalapeno note in these aromatics.  (Repeated tasting on a later night with a different bottle and consistent impressions.)