on December 03, 2013
The leftovers are gone, the recycling's been picked up, and the only evidence left that Thanksgiving happened at all sags over our belt lines.

(How's that for a foreshadowing of this recap?)

In fairness, it was a terrific holiday on all fronts but the wine.  Family gathered, the food was delicious, and laughter was shared in abundance.  But the wine...oh, the wine...

The Pelerin Pinot Noir ordered for the big meal was spoiled.  Two bottles proved this - both having an identical piercing tartness that started with the barely approachable nose and continued on through the offensive palate.  Plan B involved ordinarily dependable wines, but even those just didn't work. 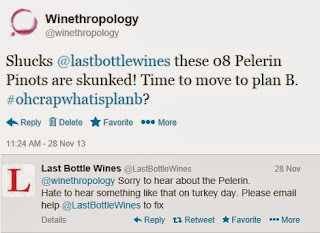 My head said Riesling for white, but my compromising heart said Chardonnay.  Chehalem's Inox Chardonnay, which is a low-ish 12.9% and sees no oak, felt one-dimensional with the food.  A Cameron Hughes Pinot Noir from Russian River Valley was too boisterous and clashed with the smorgasbord of flavors on the table.  And Montague's sophisticated, delicious red from Columbia Valley showed instead as a block of oak and hard blackness.  Both reds were just too much of everything for the meal.

Despite having the best of intentions, I ignored some critical elements of my own advice (and Eric Asimov's) and adhered too strongly to others.  Confining options to US producers also meant sacrificing accessibility to low alcohol, low oak, fleeter-footed wines.  Most wines made here tend to be big and proud and treated and anything but subtle - which was exactly the problem with the wines that ended up on our table.  The flavors were also way too contrasting, creating palate confusion that distracted from the harmony on the plate.  Next year I'll do it differently, though I say that every year.

But these lamentations belong in context.  It was the wine and only the wine that was less than stellar.  No one else gave it as much thought as I did.  And it didn't inhibit our ability to enjoy one another or our dinner.

Oh, and that Pelerin?  I had ordered that from Last Bottle Wines who, after I panic-tweeted that the wine was skunked, made things right by sending a return shipping label for the remaining two bottles and offered to credit me the entire purchase amount.  How's that for customer service?


As we stare ahead into the bright lights of Hanukkah, Christmas, and New Years, here's hoping we all maintain some semblance of balance and perspective.  Wine is a small part of the picture.  And, if treated as the social lubricant that it is, will likely repay you in kind.