on December 22, 2013
This is the time of year for bloggers and publications to release their annual 'Best Of' lists.  Though intended to both praise producers and guide consumers, the lists assembled by those I follow instead read like a year in review of personal conquests or, worse, like entries in a competition of the obscure and rarefied.

Sure, Winethropology could join those ranks and wax on and on about the pristine and enthralling 2000 Monti Barbera (scored for $7 at auction) that, by all rights should have long been vinegar by now.  I could make you drool over the rare and exceptional experience that is the 2000 Ridge Monte Bello Cabernet.  And I'm also betting you'd get a bad case of wine envy if I spooned out the memory of the whiplash-inducing (and insanely expensive) thrill of the 1982 Chateau Haut-Brion.

But what would the point be in that?  There's little benefit to you in my braggadocio if you can't go right out and put your hands on the goods to see if you swoon as I did.

This year, the point of this list is accessibility, both in terms of availability and relative affordability.
To that end, the following wines offered enough of a noteworthy combination of value, quality, and excitement to make them "repeat offenders" - or wines which warranted repeat procurement.  These prices might require a bit of elasticity in terms of what you consider value, though rest assured each of these wines offers an equally compelling experience for the money.

Before the list, a note on vintage trends.  At the risk of sounding like a repetitive crank, 2011 was a tough vintage in much of California.  There is a wide gap in terms of quality and enjoyment to be had between 2009s and 2011s.  Of course there are exceptions, but I look forward to the unwinding of 2011 inventories.  So, while we're waiting for 2012s to hit the shelves, some broad strokes on where you're likely to strike better quality and value: 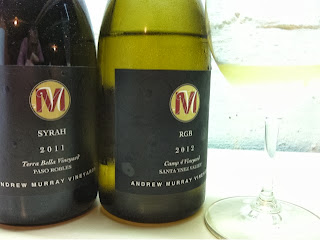 And some cautionary notes...
Okay, down to business.  In order of hue, the following made the cut for the Top Wines of 2013:

2012 Andrew Murray Vineyards RGB  Santa Ynez Valley $25
Brilliant and dazzling. A blend of Roussanne and Grenache Blanc, there's so much going on in this
wine, it distracts from conversation.  Is it possible that the fruit in this wine is at once electric and gentle?  Indeed it is.  The Roussanne adds character and depth without dragging this light footed beauty down while the Grenache Blanc provides the pure fruit and intoxicating aromatics without heat or overpowering acids.  Soft and bearing some creaminess, it's a combination that works better than a creamsicle.  If you don't believe that white wines can convey profundity the way reds do, then put your hands on a bottle of this and you will see the light.

2011 Tablas Creek Cotes de Tablas Blanc $28 - Good God! Dizzying in its rapid fire attack of multi-faceted, complex white flower aromatics and full frontal assault of flavors that manage to be supple.  Irresistible and worth every penny all day long.  This will be on the table for Christmas Eve dinner.

2011 Gallo Chardonnay Russian River Valley Signature Series $30
There's a richness and luxuriousness here that forces a languid response to this wine. As in, it slows you down so that you can better pay attention. Concentrated Chardonnay treated to the characteristic California-style oak regimen yet with nary a hair out of place. Like its Cabernet sibling, it represents a significant step above the ordinary, though, if this is Gallo's entry into Reserve-level competition (think in league with Beringer's Private Reserve and Mondavi's Reserve bottlings), then it has a ways to go in terms of refinement and profundity. In fairness, however, it is from the 2011 vintage and the price is a fraction of the upper echelon products, too. If your tastes lean towards malolactic California Chardonnay and you're looking to splurge (without stealing someone's platinum card) all of the wines in this Signature Series are worthy of your attention.


2012 Cameron Hughes Pinot Noirs $18-ishCH Wine's sweet spot seems to have shifted from Napa Cabs to California Pinots this year.  While they fall something short of mind-blowing, I'll take damn good at under $20 for a Pinot any day of the week.  The better lots from Cameron Hughes move so quickly that it's tough to recommend a specific one that will still be available when you look for it, but a string of winners this year inspire confidence in Cameron Hughes as a source for Pinot Noir.  These include 395, 428, 271, and 403.  New releases (of which there are a few) require a couple of months after arrival before drinking (seriously, they stink before they have a chance to settle down.)

2012 Domaine Laroque Carcassonne $10
This $10 gem is a fantastic, versatile pleasure. Made of 100% Cab Franc, which often translates to taut and lean, but in this case is ripe and well fleshed-out - a lot of drinking enjoyment to be had in this terrific value.  Big enough to hold up to grilled meats, but crowd-friendly enough to enjoy pre-meal, too.  If the label looks stuffy or formal it isn't that at all. But if it makes your neighbors think you paid a lot for it, who are you to correct them?

2009 Chateau La Grange Clinet Bordeaux $16
From the vaunted 2009 vintage comes this wonderful value.  Given some time to breathe and a meal to cozy up to, it expands on its initial humility and delivers increasingly appealing round, dark fruit while maintaining its distinctive Bordeaux character.  Merlot brings the velvet while Cab applies the grip.  I first had this while over at a friend's for dinner and pegged it to be twice the price.  A good one to enjoy now, but also to throw a six pack in the basement to see how it improves in the years ahead.

2009 Chateau Jouanin Castillon Bordeaux $15
Cut from finer fabric than the La Grange, this is another example of a wine with ample dark fruit made in a somewhat international style.  What's different about this wine is its Bordealais refinement and elegance.  It delivers all the drinking pleasure - and then some - as the La Grange, but adds a dimension of grace and complexity that makes this a wine worth your effort to seek out.

Serves as the benchmark for quality red wine under $15 in my book.  Big, bold, irresistible.  Vibrant fruit, lots of oak.  Lots to love.  Lush, extracted, dense fruit framed within broad-shouldered structures, and amplified by warming oak treatments.  This Merlot tastes better than most people believe Merlot should be.

seasoned veteran of Napa's triple digit bottlings. And, while not quite the phenom the 2008 was, the 2010 Cabernet helps explain why this is an easy recommendation to make. Still just barely emerging into vinous adolescence, it requires some hours breathing before beginning to shake off its tight, closed tannins. But when it does, that dependable elegance, spot-on Napa Cab character, enticing acidity, and voluptuous baritone fruit come into focus. This wine has loveliness and real drinking pleasure in its future.

2010 Mercer Canyons Horse Heaven Hills Cabernet $15   This is a proud wine. The fruit is honest.  The structure is substantial. The value is irresistible. The risk is low.  Why this wine doesn't cost twice the price is beyond me.

2007 Giuseppe Campagnola Amarone della Valpolicella Classico $33
Amarone is in a class of wines which are not only expensive, but which below a certain price point are not worth buying.  Barolos, Burgundies, Brunellos are in this group, too.  If you find one for under $30, odds are (regrettably) very good that the wine will be a let down.  To experience the truly soul-stirring experience these wines are famous for requires reaching beyond the $50 mark.  On a rare occasion, a screaming bargain turns up on the radar.  The Campagnola Amarone is one such exception.  Though you're sure to find other Amarones on the market that deliver more dizzying intensity and elegance, you'll have to spend thrice the price.

2009 Po de Poeira Douro Tinto $25
With fortified wines as an important exception, Portugese wines haven't quite resonated with me -

until now.  Most of the reds I've had from the Douro Valley are vinified from the same grapes used for Port and they come across as either muddled, under ripe, or both.  Not so with this attention-commanding example.  To describe it as big only addresses the profound depths and vaulted heights its range of flavors spans.  But size alone doesn't make this wine - or any wine, for that matter.  The way that size is structured, however, does.  Muscular and sculpted, the massive meat of this wine hangs on a framework that makes its magnificent heft manageable - but just barely.  Yet for all its intensity, it delivers intricate nuance in the margins that make this an exciting wine today - with even more promise in a year or two.
andrew murray RGB Chateau Jouanin Castillon Chateau La Grange Clinet columbia crest h3 domaine laroque Giuseppe Campagnola Amarone Mercer Canyons Cabernet Po de Poeira Douro tablas creek blanc