on January 19, 2014
Update: On day two this wine had uncoiled, growing in its mass and grace.  This kind of softening with time open is a positive bellwether of ageability.  I look forward to revisiting this wine in the years to come.

There's an allure in the prospect of aging wine.  That a bottle can evolve and improve over time is as intriguing as the possibility that what you ultimately consume outperforms the price at which you acquired it.  But retrospective reviews on wines that have matured into better versions of their younger selves is not particularly helpful - where is the average wine drinker going to find a five or so year old bottle?  So, here's one that possesses the raw material for aging that you can put your hands on now.  While this doesn't have the stuffing to be a birth year wine (one to save for 2031 when a child, niece, or nephew turns twenty one), it will reward the patient among us in five years.


Say hello to the 2010 Chateau de Marsan Cadillac Cotes de Bordeaux ($15)
Like the ugly duckling only she's not ugly.  This wine is heavy on intellect, while medium-bodied on the palate.  It's profound in its capacity to draw you in, though surprisingly easy-going and easy to just drink.  Brimming with depth, but shy on density, it has head-turning acidity that somehow remains approachable in its youth.

In other words, this Bordeaux is a jumbled basket of contradictions - as confused and muddled as this review.  It represents a cliche of juxtapositions; waffling, waiting to unravel, to be decoded into something more.

Herein lies the promise of aging wine.  These discombobulated components will (I've wagered) relax into dimensions of drinking pleasure geometrically greater than what it is today.  Five years?  Ten?  Who knows.  But at $15, you might consider investing in a handful to revisit every couple of years....like catching up with an old friend. 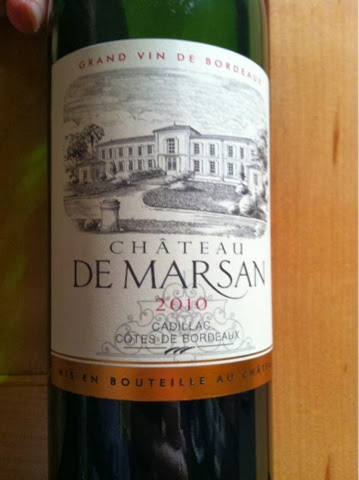