on February 24, 2014
This week we have a round up of wines from places far and further.  There are a couple of real gems here and not a single loser among them.  Of particular not is a quiver of four wines from the Lodi region in California.  Most typically associated with Old Vine Zine, the folks at Lodi Wine always put the best sample packs together, highlighting the versatility and value to be found here.  There is terrific quality and breadth from this underrated region. Also of particular note is the first wine, a $10 winner that delivers at twice the price. 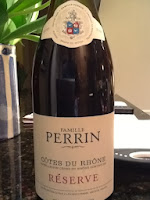 From the makers of the famous (and very expensive) Chateau Beaucastel Chateauneuf-du-Pape comes this exciting bargain.  Though the nose on it has a thin, slightly off-putting funky edge to it at first (which some may actually find intriguing), the palate is soft and inviting.  Simple in the most flattering way - straightforward fruit balanced by mid grade acidity and middleweight structure. If that sounds average, this wine is so much more than that.  It is an appealing, textbook Cotes du Rhone with a crackerjack price. To boot, after opening up, it easily rises another couple of notches to darn good. Another one to stock up on and reach for to accompany those winter midweek meals
2004 Kiona Cabernet Washington $22

Prominent cedar notes overlaid on soft, round Cabernet make for a strong first impression. Succulent tannins and come-hither depth of flavors continue the infatuation. Hard to fathom such freshness from a 10 year old Washington Cab. Finishes longer than a midnight wait at the emergency room. Is there any more of this out there?  Yes, there is.  Grab some.  Thanks, Todd!


2007 Ca Del Monte Ripasso Valpolicella $25
Outstanding texture and body on this luxurious, fully flavored Italian red.  Bodacious without sacrificing any class, this wine is a strong reminder of why rispassos represent such a terrific value.  Hard to find, but worth the search.  This one will haunt me for weeks.
2012 Estate Crush Winery Albarino Lodi $18 (Sample)
Alot to like in this clear, focused, not-shy-on-fruit package of refreshing and pleasing fruit.  Slightly drier than most Albarinos out there, but equally delicious and then some.